Rise of the Dragon

Rise of the Dragon is a Pathfinder campaign by Panzerman in the Forgotten Realms. The campaign takes place in the Tunlands to the west of Cormyr and uses the rules in the Kingmaker Adventure Path to administer domains. It is a sequel to the Purple Dragon campaign.

It is the Year of the Voyage (1398 DR) and the 18th year in the reign of King Azoun V. Cormyr has enjoyed a long period of peace, but its finances are poor. Sembia has recovered from its military losses and is blocking Cormyrean merchant vessels. The King wants to promote overland trade with the west and has promised land and glory to those willing to claim the Tunlands and the Farsea Swamp for Cormyr... 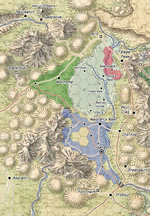 See the nav box at the bottom of Rise of the Dragon pages for quick links.