Locations (Rise of the Dragon)

Various locations in the Rise of the Dragon campaign area are described on this page. Please see the map below. Note that some lore has been changed in the campaign. 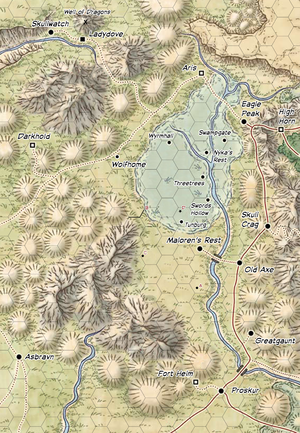 Darkhold, originally called The Keep of the Fallen Hills, was once the western stronghold of the Zhentarim, located near the Sunset Mountains in the Western Heartlands. The current occupants are unknown.[1]

Eagle Peak is a human hamlet in the Storm Horns, a mountainous area northwest of Cormyr. It is built on a large outcrop and has a population of 153. It is a popular caravan stop.[2]

Fort Helm was once a major outpost of the Church of Helm. According to Dorian Wolfe, it was in decline in the 1370s. It is unknown if the fort is still held by the servants of Helm.

High Horn is a huge Cormyte military stronghold at the top of the High Horn mountain in the Storm Horns. The stronghold guards the road to the west through High Horn Pass in order to prevent potential invaders from passing the Storm Horns.It is garrisoned by around a hundred archers and three hundred other soldiers. In the winter, it is home to half of the entire army of Cormyr. The stronghold is often home to War Wizards as well. It has never come under siege or attack.[3]

Proskur is a large city just outside of Cormyr. It is a bustling hive of transient filth and shadowy merchants, and few people travel the streets with an honest intent.[4]

Skull Crag is a human hamlet in the Storm Horns to the northwest of Cormyr. It is a mining community with a population of 270.[5]

A hamlet in the south part of the Marsh of Tun. It is home to a dozen families.

This is an evil place where lesser creatures from the Abyss are sometimes able to enter the world.

This is the agreed upon border that separates the domains of Baron Brandon Ironwolf and Baron Tyrion Crownsilver.

A gold mine in a small hill on the plains. It is operated by halv a dozen miners.

A small island in the swamp. A pentagram on a rock has been used to summon demons. A secret underground sanctuary is now abandoned.