Wolves in the Night

In which the knights fight a fearsome werewolf.

Sir Jorstag and the foreigner arrived the next day with the knights' stipends. This provided a welcome influx of cash for the knights. Menkalinan had to make do with the few gold pieces he got for his trouble.

Jorstag was eager to join his friends in the Purple Dragon, so the three knights and the paladin made their way to the General's tent. The Steel Regent was in council with the General, and the young knight waited for an hour before the Regent ledft with barely a nod to the eager knights. Dorian stated their business and the General readily agreed to induct Sir Jorstag into the Purple Dragon, and asked that the knights and their companions to be ready to leave in the morning. Florian raised the issue of the foreigner Menkalinan, and the General let them understand that the he could accompany them, but on their honor.

The next day, one of the Captains arrived with orders which he gave to Sir Markvart after a brief discussion of knightly pedigree. The knights are instructed to make a sweep to the northeast towards the Thunder Gap on the Sembian border and see if they encounter any enemies. The wizard Iordan was forced to remain in camp on arcane business. The other heroes left at once and began their patrol. 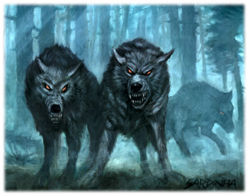 Wolves in the night.

They journeyd east and it was not many days until they encountered a score of orks in broad daylight. The rabble were headed towards the border and put up little resistance to the fearsome mounted charge. Soon, most of the orks arweree dead or wounded. The two surviving orks told of a horrible creature that came during the night to kill them all. They were headed towards the border when they were intercepted by the heroes. Despite Dorian's misgivings, Florian let the two orks go with a stern warning to never return to Cormyr.

Later the same day the group arrived at on old farm, well tended with large fields and orchards. It appears to be abandoned, for they saw no livestock. On closer examination, they found several ork bodies, some of which appeared to have been thrown great distances or suffered savage bites from a large creature. Most likely the orks were attacked during the night and fled at first light. A creature that could make orks brave the light of the sun must be fearsome indeed. With that sobering thought, the group made camp in the stable and post guards.

The group waited uneasily, and after a few hours they heared a large creature move outside the stable. The knights braved the darkness and went out to face this unknown threat. Outside, many drow and a fearsome dire wolf lay in ambush. Dorian slayed the giant dire wolf while Jorstag and Markvart prove that cowardly drow were no match for Cormyrian knights. Soon half a dozen drow were dead. Inside, brave Florian and the foreigner have to deal with a new threat as the side of the stable is torn open and a werewolf appears. Markvart charges the foe and is soon joined by the other knights. The fearsome foe is all but impervious to good Cormyrian steel, but the knights' swords and Florian's arrows wound it severely. When the monster finally flees, most of the group is injured, and Markvart and Dorian are barely able to remain on their feet. An examination of the dead Drow show that they are using what looks like local equipment. This is quite odd.

When the sun rises, the knights and their companions break camp and set out for the army camp. Hopefully, they will receive dive aid which will prevent them from falling victim to the dread curse of lycanthropy.