Iordan was born in Cormyr to a Cormyrean father and a Sembian mother. When Cormyr started to grow dangerous, his mother moved back to Sembia with him, while his father went out to defend the country. Iordan was about 12 at the time, and had a hard time adjusting to Sembian values, but learned a lot in Sembian schools and as an apprentice in his mother's merchant house. 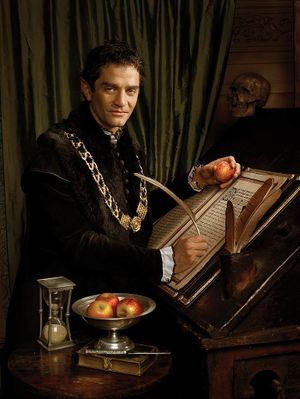 Then came the battle of Marsember, and Iordan's father died. The news took a long time to reach him, but when a messenger arrived with his rod, the family had to beleive the news- Iordan was 15 at the time and decided to go to wizard school in Cormyr instead of continuing his successful apprenticeship as a merchant in Sembia.

The first time in Cormyr was harsh; Iordan was accused of being a Sembian and had to work at removing his accent. But nothing succeeds like success and he proved himself by his studies. During this time he became somewhat more reserved and less outgoing, taking after what he remembered of his father, which he idolizes. Iordan also idealizes chivalry, tough he does realize the weaknesses inherent in the system. He wishes Cormyr would adopt some of Sembia's efficiency without losing the soul of the nation.

Tall and handsome, but with a somewhat boyish look, Iordan could be a real charmer if he was more outgoing. He has straight black hair in a conservative short cut. Something of a knight fan, he took well to the martial training Cormyrean wizards are supposed to practice, and has the build to prove it.

Iordan reveres Deneir, and plans to call himself "The Purpel Sage" in his honour. He rides a tan light warshorse named Maple. He also carries his father's old rod (club) as a symbol of discipline. In alignment he is torn between the Lawful Neutralness of his father and the Neutral Goodness of his mother, which comes more naturally to him.

A respected War Wizard of Cormyr, Cladivus was an overacheiver and a harsh man. Duty above all was his credo, and he had ideals like "spare the rod, spoil the child". Luckily for Iordan's memory of him, they were separated before Iordan came into a rebellious age. He worked on several administrative reforms and was a great proponent of royal power and centralization. When the war came, he was on the central command staff, and he died with the king at Marsember.

A merchant-bard of a prominent family in Sembia, many were astonished when she wooed and won the harsh Cormyrean war wizard who was much older than her. It appears that the match was one of love, but naturally she continued to develop her mercantile interests while in Cormyr and she won access to the academy. Some went so far as to mutter that she was a spy. She was sad when she had to leave because of the wars, and Cladivus grew even more precious to her in separation. But when he died, she grieved intently and let go, continuing her life in Sembia. Since the separation, Cordina has remarried, an event Iordan refused to attend.

Cordina was a young mother and is still a young and attractive lady and is a part of the party circuit. She is very emotional, but emotions wash over her like rain; she doesn't stay wet long.

Iordan has a younger sister named Iocasta by the same father and might have a number of small half-siblings in Sembia by now.