In which the heroes once more encounters the foul werewolf and conquers him.

The heroes consider staying in the city of Arabel a while, but the call of the quest to conquer the werewolf proves too strong, and soon they once more are on the road, trying to find the tracks of their elusive quarry.

Now in the heartland of the kingdom, it comes clear that the woods are devoid of wolfs; the werewolf still strikes down sheep as it passes, but the traditional scourge of the land, the wolf packs, are nowhere to be seen. 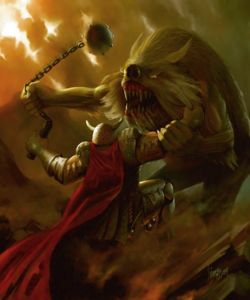 In their travels the heroes comes upon a bridge, where Baron Ruthwen Ironcrow challenge the knights for the right to use the bridge. Jorstag is the first to rise to the challenge. A glorious jousting bout follows, where Jorstag unsaddles the baron during the third pass. All are in agreement it was a good joust, and the baron invites the heroes to share a meal and tell their stories.

The heroes encounters two woodsmen, and recruit them in the quest to find the werewolf. Their cunning and knowledge of the land proves invaluable, and soon the heroes have the opportunity to once more do battle against the creature. It is not long before Sir Markvart ends its life in a furious lance charge. As the werewolf perishes, with its dying breath it curses the Wolf Queen and her fickle gifts.

On their journey back to the army, they find the army already at Arabel on its way back for the court season. The General receives our heroes and the word that the quest has been fulfilled and the land saved from the monster, and is well pleased.

Soon thereafter, the regent gifts the heroes with personal invitations to the grand ball in the capital during the court season. It seems as if the heroes' reputation has reached the regent's ears!