In which the knights win love and glory in at the royal palace.

A week after the adventure in Arabel, the heroes left for Suzail, as did most of the other nobles in the country. In the royal capital, the met with family and friends. On the day of the royal ball, the gathered at the royal palace, clad in in the latest fashions as benefited their standing. 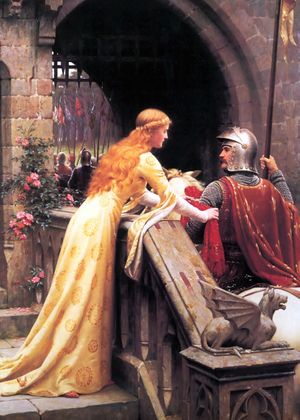 Baron Delany arrived late, clad in full armor and clearly intent on settling some wrong. Count Lombard was notably absent, and this was the subject of some speculation among the nobles as they waited for the young king to make his entrance. Once again, they met Count Ruthwen Ironcrow who introduced his younger sister Mabel to the knights.

At the banquet, Markvart was seated next to the widow Countess Evelyn Redbough, who was finally out of mourning. Dorian found himself next to Mabel Ironcrow, and was much taken by her charm and beauty. The knights and their companions were toasted by the regent in recognition of the slain werewolf. This great honor was to be the cause for attention from both fair ladies and jealous knights. Indeed, all three knights were to be challenged during the ball.

Dorian was soon smitten by Mabel Ironcrow's beauty, and foolishly stepped on the hem of her dress during the first dance. A rival for the fair Mabel's affection promptly challenged him. Though Dorian's error was not in dispute, he maintained that the lady's beauty had caused him to pay less attention the dance than required. The other knight chastised him for being a clumsy oaf, and the two knights retired to the courtyard to settle the matter. They were soon joined by onlookers and other knights eager to settle disputes of their own. Dorian gave his foppish opponent a chance to apologize, but he would not relent. Dorian's trusty war-axe Havoc settled the matter with a single blow. Jorstag then defeated a noble Jorstag managed to goad into a duel as that same noble tryed to goad Markvart into a duel, and Markvart ably defended his honor against a friend of Dorian's opponent.

During the ball it came to pass that all three knights earned a favor from a lady, though of a different sort. Mabel gave Dorian a ribbon as a token of her affection and forgiveness, and Miranda Beauregard gave one to Jorstag. Evelyn Redbough, on the other hand, hinted at an entirely different favor, to be granted to Markvart at a later date.

Later, a cleric of Bane arrived with grim tidings. This was Father Theron, a cleric of Bane, and he told how his men had found the body of Count Lombard's messenger with a message for regent. The barbarian leader Balnock the Red had not only united the tribes, but he had also gained the allegiance of the Count. Cormyr had thus lost much of it's territory on the other side of the Storm Horns. This insult to the kingdom could not stand, and the regent called upon baron Delaney to muster the army. The regent inducted the knights into the Purple Dragon Knights, and ordered them to seek out the barbarian hordes. The barbarian leader was known to be an admirer of Cormyr. The knihts must make the barbarian leader see reason, defeat him, or there will be war in the Stonelands.