In which the heroes defeat a undead black knight.

The heroes spent the week after the calamitous banquet in preparation for the quest. They were issued winter gear from the royal armory, and some magic items to aid them in their quest. Foremost of these was a pennant, sure to fill the knights with resolve and their enemies with fear. Dorian and Markvart agreed that Jorstag should carry it on his lance since it is traditionally entrusted to a young knight.

They rode north through, through the pass in the Storm Horns, and into the now lawless lands that lay beyond the heart of Cormyr. For a few days, they were followed by a wolf pack, no doubt servants of the Wolf Queen. After a few days, they arrived in a small village which was bustling with activity. The reason for this was soon apparent, for three mercenary recruiters conducted their business in the village square despite the winter cold.

The mercenaries came from the north, and were previously in the employ of Zenthil Keep. They were much cheered by the prospect of new employment when they heard of General Delaneys imminent arrival. The Knights sought out the mercenary camp, and learned that these heavy infantry units were the Red Eagles, Fenrir's Company and Keegan's Company. These were commanded by Captain Lindwurm, the half-ogre Fenrir and Keegan, a dwarf of unsurpassed greed.

The knights met with the mercenary captains and gained valuable intelligence about the lands of Count Lombard. According to the mercenaries, a nearby guard-tower had been abandoned by the guards, and was now occupied by at least a score of undead. While the mercenaries had little interest in the tower, they agreed to let the knights hire one of the mercenary scouts to guide them there. 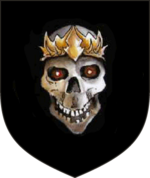 The black knight bore the symbol of Velsharoon on his shield.

The knights set out for the tower the next day, guided by the mercenary scouts. Soon, they spied a few guards who were gathering firewood. Shamefaced, they admitted that they had been forced to abandon the tower by one of the young Count's new friends, a black knight and his undead minions. After the old Count died, his widow and daughter had not been seen recently. The guards a a very low opinion of the Count's foreign friends, rakes and fops who preferred effete rapiers to honest broadswords.

The knights decided to evict the knights posthaste, and were soon joined by the guards who sided with the crown. Most of the undead were turned to dust by Florian, and rest were dispatched by the knights and the guards. Jorstag called out a bold challenge to the unseen knight, and was soon answered by the black knight, who nigh impaled the brave knight on his lance. The other knights joined the fight, but it was the paladin's well-placed arrow who felled the foe.

From the defeated black knight: