In which a village lost is found, and glory won.

It was spring in Suzail, shortly after the duels. Jorstag received a a most peculiar letter from the steward of the family estate. The letter said that a village has disappeared! Jorstag told his lady that he must leave on a quest to aid his family and redeem his honor in her eyes. He gathered his companions, and they rode off to the Carmog lands in the west.

After a few days, the companions arrived at the Carmog barony, the border of which was guarded by the family troops. Jorstag quickly took stock of the situation, and learned that the (unnamed) village [1] had sunk into the ground. The steward had recruited adventurers to investigate, but none of them had been seen again. Jorstag gave orders that soldiers should be posted on all roads at the village to prevent further loss of life. 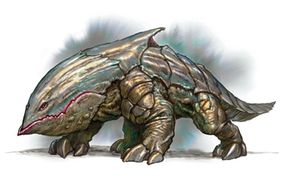 A bulette, or "landshark".

An investigation of the village showed that all houses had collapsed, and that some large, burrowing creature had probably undermined the village. There were no signs of surviors. Indeed, it appeared that all villagers had been dragged underground and eaten. A lone survivor was found, an old, senile woman who lived by herself at the edge of the woods. Iordan speculated that the burrowing animals had avoided her cottage since the roots would have made it more difficult to reach. They made sure that the old woman had food and water, and set up camp.

The next morning, the guards reported that they had seen a light in the distance during the night. The group left their camp to investigate. A moving mound on an open field turned out to be a burrowing bulette which attacked the knights. As the knights charged, they were flanked by two other land sharks. The bulettes were formidable opponents, but were vanquished by martial and magic might. Metal rings attached to the carapce of dead bulettes hinted that someone had kept them chained and unleashed them on the countryside.

The heroes pressed on, and eventuelly arrived at a cave. Several bulettes emerged from the cave to fight them. As the rear guard moved into position, the soldier and squires were attacked by a bridlike demon. To their surprise, the heroes recognized the vrock that had escaped them at the old border fort. The cowardly demon was driven off by Florian's arrows, but not before it had infected several of the soldier's with its tainted spores. A timely blessing from Florian saved them from permanent harm.

After the battle, five of the huge buletted lay dead outside the cave. Inside, the heroed found much treasure. The vrock had travelled through Cormyr and killed many brave knights and adventurers. The demon had fled, and the barony was safe once again. Sir Jorstag will surely find himself in Miranda's favor after these valorous deeds.