In which a demonic ritual is foiled and the foul vrock slain.

The presence of the foul demon vrock on the acred soil of Cormyr could not be tolerated. Jorstag sent half of his men back with a report, as well as a pair of bulette heads to be made into trophies for Jorstag and Dorian. [1] The demons had terrorized other people in the mountains, and had probably retreated to its stronghold. The knights and soldiers continued north, determined to find it. [2]

They arrived at a the site of a battle where two groups of undead had fought each over. The corpses had been looted. A headless corpse dressed in purple robes showed that the Cult of the Dragon was involved, and had probably been ambushed by an enemy force. The battle must have taken place a few days ago. After investigating the battlefield, the corpses were cremated.

The next day, they were challenged by a band of orks who wanted to know if they had seen a wizard. The spoke common with a foreign accent which reminded the heroes of the Traldaran merchants they had met last year. Their cleric served a god "with many eyes". They were surprisingly well equipped for orks, and their leader even carried an adamantine blade. Dorian trick them into revealing the location of their camp, an ruined keep [3] to the north. 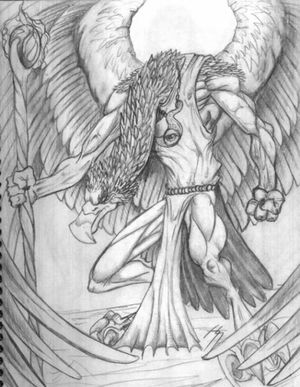 They rode on and dismounted near the keep. Florian scouted ahead and discovered that camouflaged skeletons with gongs blocked the approach. A band of a dozen or so orks was had were encamped next to the keep. Their banned was black with several red eyes. Careful study revealed that the keep had been carefully repaired to be functional yet look decrepit. Most of the guards were undead, and only a few men in purple manned the ramparts.

With the air of Iordans trusty teleport spell, the knights assaulted the castle. The guards were easily dispatched by fireball and arrows. When combat ensued, the demon cried out that the ritual must not be interrupted. This gave the knights a target. The vrock attacked the hated knights, but all defenders were not as reckless. Through the din of battle, Iordan heard an unseen spellcaster invoke meld into stone. A few wraiths proved troublesome, but were held at bay by Florians divine power and eventually slain. The vrock swore revenge as he was slain by Jorstag and Florian. Dorian entered the ritual chamber where a naked woman was chained to the walls with an iron bit in her mouth. Surely only the timely intervention of the knights saved her from sacrifice. A purple robed wizard had been blinded by Iordan and tried to fly away, but Dorian proved that his marksmanship was useful for hunting wizards as well as game.

Suddenly, the armored cleric appeared out of the floor. He was trapped in bands of steel by Iordan, and forced to yield to Jorstag. The knights freed the fair captive. She introduced herself as Cassilda, a Paladin of Tyr from the Dalelands. She had sword to defeat the Dalelands chapter of the Cult of the Dragon. She had tracked the mage to the keep and been taken prisoner. The mage had brokered a deal with the captive cleric who would have performed a ritual. Cassilda was fair of skin and had silver eyes, a testament to her asimaar heritage. Iordan seemed much taken with her.

Inside the keep, the heroes found letters from Cult of the Dragon. The conspirators were known as "M" and "B", but their plans were difficult to fathom. [4]

The captured cleric was brought to Suzail for questioning. He seemed to care little for his life, and claimed to serve Arik, an old, dead god. He had allied himself with the orks to the west, and had used the Cult of the Dragon for the benefit of his dead god. At his trial, he was found guilty of conspiracy to commit human sacrifice and collusion with demons. He was thus sentenced to death and executed. [5]