In which the heroes learn that they have earned the enmity pf the Cult of the Dragon.

Sir Markvart joined his friend in Castle Carmog, and the heroes rode off towards Aran Cabal. They traveled through a pass in the Storm Horns and made their way into the Marsh of Tun. This was a bleak place, an inhospitable marshland with few human settlements. 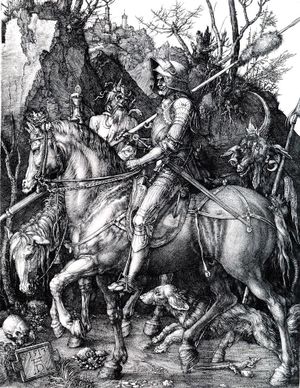 After a few days, the found a small settlement, and managed to convince the local guards to allow them entry in exchange for a modest bribe. The knights learned that a group of travelers were turned away a few days earlier. They had rented a raft and some locals guides. The heroes recruited guides of their own and continued through the swamp until they reached dry land.

The heroes were ambushed on Sir Jorstag's watch. A volley of fireballs killed Sir Jorstag's squire, Wilhelm Valdiir, and severely wounded the knights and their mounts. The knights were soon in the saddle and prepared to engage the enemy. This was easier said than done, for the enemy sent a blackguard who commanded a horde of zombies and several undead warbeasts against the knights, while the enemy wizards remained hidden.

Florian used his magic cape to catch the zombie horde in a web. This allowed the knights and Iordan to engage the undead. The enemy fought hard, but fell to lance, sword, and spell. When the battle was over, Markvart and Jorstag were grievously wounded. After the battle, a dead cleric was found. He never had a chance to invoke his powers, since he was invisible but inside the area of Iordan's spells.

It is clear that the ambush was carefully planned and well executed. This is likely due to Stuggart Trollhind's leadership. The knights are expected, and would do well to plan for a military expedition behind enemy lines and not a heroic quest.