The City of the Dead

In which the heroes carefully chooses what truths to tell the undead.

After the earlier run in with the nefarious cult, our heroes wisely chose to travel in disguise. Their mounts took the form of wolves, and the heroes as yet smaller creatures riding them. Thus having thwarted the cults insidious spying, the party surged onwards to their goal.

A short bit westward, the heroes beheld a pillar of smoke and wolves hurrying away; thus intrigued they felt they had to investigate. It appeared that the lost trolls from the swamp here had been fighting each others, and then killed and burned one and all. The Wolf Queen can only be thought responsible for this strange behavior.

Further west, the first sign of the heroes goal could be found. This was a large standing stone marking the boundaries of the necromantic realm the heroes was racing towards. It was full of engravings in different languages, all declaring this to be the border of the empire. The stone itself was decidedly evil, and had had a vilifying effect on the surrounding greenery.

At long last the heroes reached the dark forest surrounding the evil city of the long dead empire. It was blatantly obvious that this was an evil place, filling the good members on the party with a dread that their courageous hearts immediately banished. No creatures went beneath this forest canopy, and the long-gone roads was lined with grave barrows. Not long into the woods our heroes found another disturbing evidence of the evil residing here - the fallen sir Wilhelm Valdiir, who had traveled to prove his worth here but only found defeat. After a short debate, the heroes carefully took care of the remains, to bring back to his family along with the tidings of his fate. Sir Carmog took care of sir Valdiir's longsword as a token to bring honor to sir Valdiir though the successful completion of our heroes own quest. 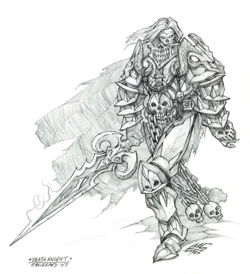 As the party now stood near the center of the necropolis, it was decided to first have a nights rest before venturing forth into the destroyed city. Alas, the night would not be restful. As the bold paladin stood his vigil, the ghost of sir Valdiir came upon the party on a spectral steed. Even in undeath was his spirit still a knight. He was bound to serve the masters of this place against his will, a council was held between sir Valdiir and our heroes to decide the the terms of the skirmish. Sir Valdiir attacked in a mighty charge, narrowly avoided by sir Carmog thanks to the mage Iordans mighty magic. Under the combined onslaught of lance, sword, missiles and arrows it was not long until the spectral knight was defeated, and his unwillingly service to the dead empire came to an end. Thus our heroes rendered sir Valdiir the last favor they could give him in this dark and accursed place.

Not long after this, a host of undead came forth from the dead city in the middle of the forest. It came to our heroes, and a spokesman demanded to know who the heroes were and what business they had here in the empire disturbing the peace. Our heroes spoke boldly their names, and pointed out that they had indeed not disturbed the peace until set upon agents of the empire, and thus the empire itself was disturbing the peace. The emissary obviously found these true and wise words, and invited the party as guests into the city. As the city in this dark hour now seemed transformed into something of its former glory, the party decided to come with the emmissary as guest, thus protected by the hospitality rules of all civilized places.

The emmissary, claiming to be the vizier of the empire, questioned the heroes of their quest. As our heroes spoke of the cult of the dragon, and how they now had the service of the general Blackskull, once of the empires army, the vizier was very upset and claimed this could not be the case; surely the general faithfully defended the border to the elven woods. After the demonstration of the general's tabard, and repeating the statement under a Zone of Truth cast by a summoned undead liche-priest, the vizier became certain that the truth had been told. As our heroes now also told of how the chaotic cult even now conspired to steal his lord and masters sword, he was distraught enough to risk the kings wrath in disturbing him, since this seemed to be a matter well outside the authority of a mere vizier.

As the undead king himself appeared, the evil in the room became almost a physical thing, but the stout hearts of our good heroes did not fail even in the face of this. Boldly and forthright they spoke to the king of his general and the cult, and he found their words true. Thus was a scroll made to be brought to the undead general Blackskull, and the party was dismissed from the audience with the king and the vizier.

As the party were leaving, they were given a guide to the part of the city where the cult had arrived and now make their evil plans. After a short passage through riuns now once again bereft of their former glory, the party could engage the three remaining cult members from the ambush earlier, and dispatched them in short order. Much more dire than the pathetic cult members was the horde of carrion crawler descending upon the scene soon afterwards; the heroes, deciding that no glory was to be found in a prolonged battle with mindless creatures, and blasted their way out of the ruins and back into the woods.

Since the cult threat had been taken care of, the party decided to forgo the protection of illusion on the way back, and the travel was restful enough. They passed by the swamp village to inform them of the fate of the trolls, before once more setting course for the inner parts of Cormyr. Home was once more in sight after a successful quest!

His body and equipment will of course be returned to his family.