The Beginning of the End

In which the knights ponder the coronation of the crown prince and the final confrontation with the dragon.

It was spring of the year 1380, shortly after the death of King Balnock.[1] After the burial of the king, Magister Iordan appeared before the council of regents, and briefed them about his research on the nature of the drgon known as The Slayer of Kings. He had determined that it was an ordinary dracolich, but a demonic dragon who had later become infused with necromantic power. 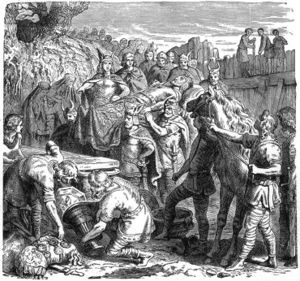 King Balnock is laid to rest.

In situation in Felsenmark was serious. With the death of King Balnock, it would likely fragment into separate tribes. Countess Juno Lombard was perhaps not popular, but she had the respect of the tribes. As the former liege of much of the barbarian lands, she was the logical choice as ruler of Felsenmark. Before the knights dared broach the subject with her, they decided it was better discuss it with their barbarian friends first. Inevitably, this involved much drinking and eating. Many were of the opinion that the fact that Countess Lombard was a woman and harsh[2] ruler was something of a problem. Some, like Gaiseric, had already sword allegiance to her, so it was clear that the barbarian way of life had already changed.

As for Othos, he had no interest in the crown. He desired naught but vengeance for his friend and king. The heroes[3] and Othos swore a blood oath to slay the demonic dragon known as the Slayer of Kings.

Countess Juno refused become queen of Felsenmark since she was a loyal subject of Cormyr and not a sovereign in her own right. She was however convinced to accept the newly created position of Lady Protector of Felsenmark. The thing[4] was called among the barbarian tribes Sucession is discussed. While there are were some dissenters, most agreed that times had changed and the fates of Cormyr and Felsenmark were entwined for better or worse. Countess Juno held a short speech where she proclaimed herself the Protector of Felsemark and their liege. There were a few murmurs of dissent, and some of the more traditional tribes will no doubt soon leave Felsenmark and the Stonelands.

In Suzail, the plans for the coronation or Crown Prince Azoun were well under way. A suitable day in the summer was agreed upon.[5] The dragon will most likely strike at the coronation, lured by the prospect of slaying yet another king. It will be up to the heroes and the Purple Dragon Knights to slay and preserve the future reign of king Azoun V.