In which in which the knights return to Felsenmark only to find king Balnock slain.

The knights entrusted the crown to Sir Jorstag and set off towards Cormyr. They were somewhere north of Shadowdale near the Moonsea. The weather was beautiful and the heroes were in high spirits. With the help of their elven allies, they traveled without mishap until they encountered an abandoned orch village. A cursory examination showed that religious idols than honored Gruumsh and other orchish dieties had been discared, and the temple now showed prominent, if crudely painted, Orcus icons. Tracks led to the southwest. The heroes surmised that someone had pressed the entire village into service and led pressed men, women and whelps towards the Felsenmark border. Later, an ogre village was found, empty except for the corpse of its chieftain.

The heroes passed through Mistledale towards the gap in the Thunder Peaks. There, they were hailed by a group of Daleland scouts. They had found some dead orch whelps and large bird tracks, which were most likely vrocks. The elves estimated that the tracks were no more than two days old, and the heroes moved with all possible haste towards the border. A score or so of human boot tracks were found. Perhaps these belonged to the cultists who led the incursion.

The heroes came upon the enemie as they were crossing the Mistlebrook. [1] Florian was spotted by a flight of three vrocks when he reconnoitered, and lured them towards his allies by means of a cunning ruse. Once they were in range, they were promptly dispatched by meansd of arrows and arcane powers. The heroes advaned on the foe, and a volley of fireballs incerated most of the enemies on both sides of the river. With the cultists and demons dead, the remaining orchs and ogres were easily scattered by the mounted knights. This threat to the kingdom was ended, but it was surely but one of many enemy forces. Archons were dispatched to border posts, but they returned and reported that they had been destroyed. Another was send to king Balnock to warn him of the impending danger. 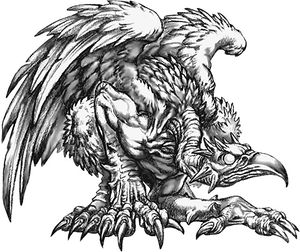 One of may slain vrocks.

Several days of hard riding towards the border followed. The heroes had received no word from the border keeps they had contacted, and Sir Jostag was concerned for the safety of his sister Lydia and his brother-in-law. Since the keep was not far away, they decided to make a short detour. They found the smoking keep in ruins and overrun with dretches and undead. Some where dretch-skeleton hybrids spawned by the foul necromancy of the Cult of Orcus.

Sir Jorstag filled with wrath, called out "Lydia!" and rode towards the castle windows[2] Valter the mage was down to his last cantrips when Sir Dorian rode into the courtyard and destoryeed the undead who were attempting to bearch the castle gates. The damage was less than it appeared at first glance. While many of the defenders of the keep were dead, Lydia and Nero Valair were still alive, and the keep was still defensible. The keep had been damaged by many vrocks who had performed the dance of ruin before they left to wreck other fortifications. After a short rest, the knights mounted their steeds and set off again.

The heroes had still not received any words from Balnock, and made preparations to teleport to his vicinity, fully armed and ready for combat.[3] The siutaion was worse than they had feared. They arrived in the remains of a battlefield near the ruined[4] barbaian city. King Balnock was dead, and his crowned head still was displayed a pike. Othos was crucified, weak but alive.

As the heroes advanced cautiously towards Othos, Iordan invoked powerful magics to prevent any demons from teleporting. Their caution was justified, for they were soon ambushed by several flights of vrocks. Most of them were the targets of several fireballs, and many burning bird demons fell to the ground. The knights charged the those who remained on their flying steeds. Sir Dorian was attacked by cowardly vrock captain who dove from the sky, but it was no match for the Cormyrean knight and was slain in single combat.

On the ground, the invisible marilith invoked a blade barrier as Florian approached the crucified Othos. When the demoness thus revealed herself, she was soon felled by blessed arrows. Othos told the knights that Balnock had been slain by a dragon who called itself The Slayer of Kings. This was none other than the wyrm who had ended the life of King Azoun IV! Othos and the knights swore bloody vengeance for the death of two kings.