In which the heroes once again enter the accursed ruins of Tilverton and learn something of the Cult of the Dragon's schemes.

On their way to Tilverton, the heroes found themselves in the vicinity of Baron Nero Valair and his wife, Sir Jorstag's younger sister Lydia. Cormyr's grates knight was scolded, albeit gently, by his sister when he swept her up in an impetuous embrace.

The pudgy wizard Valter, a former adventurer, had sword allegiance to Baron Valair. While Sir Jorstag spoke with his sister and brtoher-in-law, the wizard showed Sir Dorian and Iordan the body of a strange creature in the basement. This some sort of demonic and necromantic hybrid which looked somewhat like a skeleton with the flesh of a dretch draped over it. It was but one of the many foul creatures which had emerged from accursed Tilverton. The creature had been slain by a group of adventurers, and unlike most summoned demons it had not vanished when slain, perhaps due to its undead nature. This fusion of demon and undead was most likely the work of Orcus, Demon Prince of the Undead!

The heroes decided to continue to Tilverton. They dared not risk the wrath of Otho, so an archon was sent with a message for him. A few days was spent in pleasant company until Othos arrived with an unexpected traveling companion. This was the paladin Cassilda who had decided to brave the dangers of the ruined city. 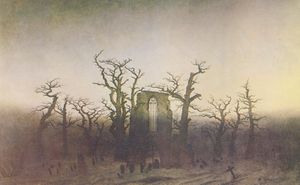 The cult hides in the ruins of Tilverton.

Sir Jorstag, Sir Dorian, Florian, Iordan, Cassilda and Othos set out for Tilverton the next day. At a border post, they learned that General Blackskull had passed this way recently, and had probably entered Tilverton from the north. The heroes decided to follow the death knight and reconnoiter before committing to a course of action.

The heroes entered the ruined shortly after daybreak. Some of the ruined buildings appeared to have been reinforced after the war, but while they had perhaps been used as some sort of headquarters, they appeared to be abandoned now. They soon found a mansion that was guarded by scores of undead warrior. The knights knew not if this was a stronghold the Cult of the Dragon or the Cult of Orcus, but the undead must be destroyed regardless of their affiliation. The knights cut a swathe through the undead warriors and entered the house. Two enormous bebeliths attacked the building, one was slain and the other though discretion was the better part of valor and fled.

Inside the building, several lesser mages was slain, but their leader was taken captive. He was rendered helpless with the aid of the cold iron bit.[1] While he did not reveal his name, he revealed that:

Soon after the skirmish, General Blackskull and Captain Chabrydis appeared. The death knight expressed his desire to slay the captive mage in no uncertain terms, but the heroes refused to relinquish their captive. Instead, they decided to exercise their prerogative as peers of the realm and sentenced the mage to death and promptly executed him.