In which in which the knights face the infernal master of Tilverton.

The heroes spoke further with General Blackskull and Captain Charybdis. The unknown ritual was a clear and present danger, and while the death knight and the erinies had no interest the future of Cormyr, they nevertheless agreed to join forces with the heroes under the command of Sir Dorian.

The need for intelligence was paramout, and the group compared notes. Sir Dorian ordered his small force forward to gather what information they could, or perhaps weaken the enemy. He left the decision to transport the group to safety to Iordan. General Blackskull took point, and the rest of the group followed some distant behind, barely able to see the undead knight through the mist. The erinyes took to the sky on black wings. The heroes rode further into the demon haunted town. The clammy mist, or perhaps the very ground they rode on filled those of firm principles and pure heart[1] with unease and even nausea.

Suddenly, the sound of powerful wing was heard from above as Charybdis dove towards the down. She had attracted the attention of half a dozen vrocks armed with greatswords, but the avian demons was no match for the knights and the she-devil. The last of the vrock tried to flee, but discovered but Iordan's magic prevented him from teleporting away. He flew away, but Florian followed on his flying steed. After a short chase, he riddled with demon with arrows, and it fell to the ground with a pitiful squawk. The young paladin's heroic did not go unnoticed, for he heard a low, rumbling murmur as an unknown entity noticed the fallen vrock. 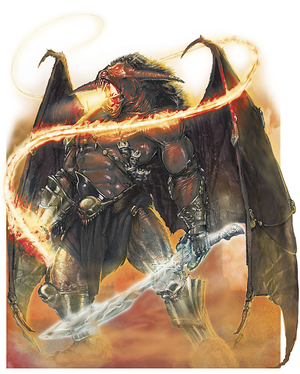 Astennu, the Master of Tilverton

This menace soon revealed itself. The knights had barely resumed their careful trek trough the ruins when the saw a huge shadow in the distance. General Blackskull and his horse were crushed instantly, ancient bones snapping like twigs. The mist parted, and the knights beheld the master of Tilverton. This was a huge, hulking balor, wreathed in flame and clad in burnished brass armor.

The knights steeled themselves and prepared to vanquish the foe or die trying. Sir Dorian ordered the charge, and Sir Iordan spurred his noble steed forward. His lance struck with the force of an avalanche, but glanced harmlessly off the enchanted metal armor. Iordan's magic managed to weaken the powerful demon, and Sir Dorian's vorpal blade and Florian's arrows wounded it grievously. The bloodied demon realized that he could not the stand against the heroes and roared in frustration. The master of Tilverton thought discretion the better part of valor, and vanished from view. Othos had not the opportunity to engage the demon before it fled, and was not amused. Charybdis identified the balor as Astennu[2], though this is of course not his real name[3].

The heroes realized that the balor would no doubt summon reinforcements. They gathered the remains of General Blackskull and left Tilverton. Othos considered staying in Tilverton, but decided to come back at a later time to seek epic foes or a glorious death. The companions made camp some distance from the town and buried the death knight in an unmarked grave.

The heroes returned to Suzail and pondered the issue at hand. They knew not when the ritual would take place. After some arcane and astrological research, Iordan surmised that that the Cult of the Dragon and the minions of Orcus were engaged in a gradual buildup of arcane power. When it was unleashed, it would probably obliterate mosts of Cormyr, the Dalelands and the Cormanthor.

The heroes decided to warn the other realms of the impending danger. Perhaps Eliminster the Sage or the elves of Cormanthor would be able to aid the knights? At a meeting with High Bishop Adalbert of the Church of Siamporphe, they learned of a powerful artifact. This was the first crown of Cormyr. The elves had taken it with them to Cormathor when they passed on stewardship of the Forset Kingdom to Ondeth Obarskyr and his descendants. If worn the prince was crowned king and wore the crown, the magic of the ritual might be negated.

The knights knew they must seek the crown. Once again, the heroes set out on a quest to save the kingdom.