In which in which the knights travel through the occupied Dalelands to confer with Eliminster.

The heroes spent some time with their families and set out on their quest to meet with Elminster[1] in the Shadowdale. Sir Jostag had recently hired a bard, who had spread tales of his adventures far and wide throughout the land. Some of them even mentioned his comrades in arms. As part of their preparations for their journey, the heroes sought an audience with Maestoon Huntsilver, who had recently led the embassy in Sembia. The patriarch advised the heroes to be polite and firm with the minions of Zenthil Keep, to be threatening and to show no weakness. 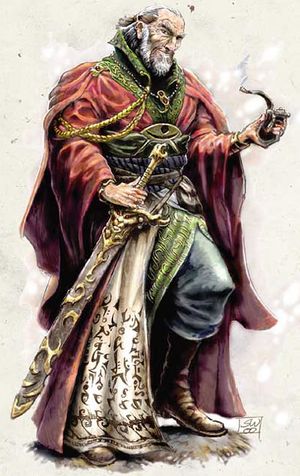 Elminster, the Sage of Shadowdale.

The heroes continues north to Felsenmark. After the obligatory drunken feast at the court of King Balnock, they met with the elven ranger Rumiziel and the twins, Kyril and Kiril, near the Dalelands border. The rangers decided to scout ahead and keep out of sight, for Zenthil Keep was no friend of the elves. The knights crossed the border and soon arrived at guard post manned by the black clad soldier of Zenthil Keep. After a false start, Sir Dorian soon learned to act with the haughty arrogance the evil occupiers clearly expected, and things proceeded smoothly enough, and the heroes were eventually given passes. As they travelled through the occupied lands, they told tales of their adventures in order to inspire the Dalelanders, though they stopped short of inciting insurrection.

When they neared Shadowdale, they were joined by an squadron of blackguards and escorted to the commander of the area. The heroes stated that they had come to meet wit the sage, as knights on a quest and not on behalf of Cormyr. They took advantage of the inevitable bureaucratic delays and familiarized themselves with the occupying forces, local government and fortifications. All of these were formidable and it was clear that Zenthil Keep intended to assimilate the Dalelands. It was also clear that the populace was most resentful of their new overlords, and glad to see true Cormyrean knights in the Dalelands, albeit only briefly.

The net days, the knights met with the wise old sage in his tower. He told them that the first crown of Cormyr could likely be found in the old summer residence or one of the ruined cities in Cormanthor. Many dangers lurked there, such as monsters and dark elves. In exchange, the knights made a small donation to fund the sage's research, and told the sage of Astennu, the Demon Lord of Tilverton.

Without further ado, the heroes set left the Dalelands to meet with their elven friends in Cormanthor.