In which the future of the kingdom is decided.

Once the knights [1] had returned to Suzail, they sought a private audience with the regent. Dorian reported on their diplomatic mission and that a peace was possible, but costly. When Princess Alusair was adamant that no part of Cormyr would be given to the enemy, Dorian explained that a war would be very costly, but that her marriage to the barbarian king could give the kingdom allies and a lasting peace. When asked by the regent, the other heroes agreed. The princess was was clearly not amused, and dismissed them. 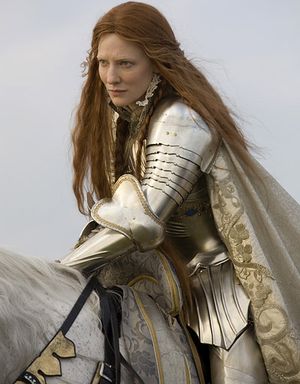 Princess Alusair was not amused.

The Parliament of Peers is a yearly gathering of nobles which is held in Suzail, the capital of Cormyr each year. At such times, the peers leave their ranks behind, and meet as brother and sisters. At these times the Parliament is guarded by the Purple Dragon Knights. While custom dictates that they do not speak, they are counted among peers of the realm.

The Parliament of 1376 was opened by Azoun, the heir to the throne. Once the young king to be had been put to bed, the regent announced that she had an important issue that all must hear. First, however, she would let her brothers and sisters discuss the state of the realm. As usual, there were many arguments between the old families in favor of strong rights for the nobles and the mostly younger families who favored a strong central power. While there was much talk about the barbarian invaders and call for action, nothing was agreed upon.

After several hours, the regent called the house to order and explained her predicament. She had been presented with a proposal that could bring peace to the kingdom and give it a new ally, but she felt that she could not in good conscience make the decision herself. If her brothers and sister agreed, she would marry Balnock the Red, and in time his realm would become a part of Cormyr. This caused an uproar, and several nobles demanded to know who was responsible. Dorian proclaimed that he was the architect, and that had done his duty to stop the coming war. He was booed by several nobles, and a duel with Count Valdir is probably inevitable.

The nobles argued the matter for several hours, loudly and passionately. The Purple Dragon Knights on guard duty were forced to remove several hotheads until they calmed down. Much to their surprise, Baron Delany said nothing. His reluctance to give voice to his opinion was most ominous. Dorian, his family and their allies argued for the unpopular proposal. In the end, it was passed with a slim margin. There were of course many dissenters, and Jorstag identified several potential troublemakers

After the vote, Balnock the Red entered the House with a token guard and addressed the peers. He looked regal, foreign but certainly not barbaric, and made an eloquent speech in which he declared his good will. He would accept whatever alliance Cormyr offered, but would under no circumstances leave the territory under his protection.

As the regent closed the session with a heavy heart, Dorian called upon the nobles to support their regent in the difficult time ahead. There is perhaps no love lost between the Steel Princess and the Wolfe. Nevertheless, Dorian knelt before his regent to show his respect. She did not look kindly upon him, but she knows he will do his duty to the kingdom.