In which the knights follow the trail of the Cult of the Dragon's ill-gotten gains to Felsenmark.

In Suzail, Iordan recieved a discrete message that agents of the crown had identified the banker of the Cult of the Dragon in southern Cormyr. This was Hans Gelt, a man of wealth and taste, if not noble blood. A plan was devised for a surprise inspection of his business by the tax collectors. These were of course the heroes, cloaked in a magic disguise.

Master Gelt allowed the representatives of the crown to study his ledgers, and a suspiciously large consignment of gold in transit to Felsenmark was identified. The banker avowed that he preferred to know as little as possible of his clients money, and had no interest except his own profit. This greed was base but certainly not illegal, and the heroes saw no reason to detain Master Gelt. 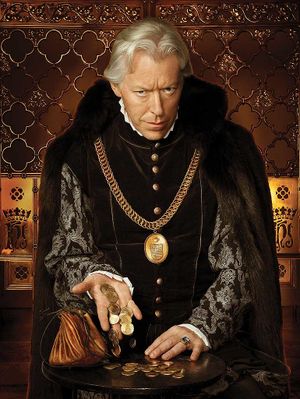 Master Hans Gelt is a man of wealth and taste.

The heroes set out for Felsenmark at once. Conflicts and and small scale wars between restless nobles were on the rise. Many had withdrawn to their domains and were reluctant to let travelers and traders pass without paying tolls.

On the way north, the heroes found beheaded messenger on the road not far from Suzail. His head had been placed on a pike, probably as a warning.[1] Barbarians on guards on the border told them that an armored warrior with a charred head had slain many on the road, and the heroes surmised that his was General Blackskull. They also learned that Cormyrian nobles were gathering in preparation for a war against Countess Juno Lombard.

Soon after their arrival in Felsenmark, Iordan learned that the local banker and suspected agent of the Cult of the Dragon was one and the same. When mentioned during the feast in held in honor of the knights, the drunken king balnock and the equally drunken knights immediately formulated a plan of action. This consisted of nothing more than a surprise visit to Master Corbit by the king, the heroes and scores of barbarian. The suspected cultist was forced to reveal his true colors. [2] He fought the intruders with spells and unleashed a summoned demon, but it availed him naught for he was soon slain.