In which the knights face the Marilith and her minions. 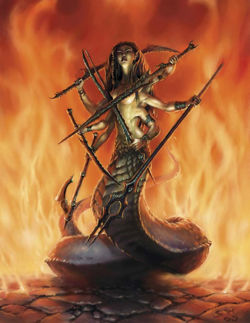 Rumiziel guided the knights into the great forest where the borders of Cormyr, the Dalelands and Cormanthor met. The heroes spoke with their guide and the twins Kyril and Kiril about the recent battle, and learned that some of the cultists had worn robes with the symbol of Orcus. The undead had moved with purpose and intelligence, probably guided by a necromancer. The elves had fought drow before, and recognized the ones they had fought recently as surface drow.

Soon enough, the party saw a perimeter of skeletons and dretcheds which guarded a clearing. Inside the clearing, large, hulking figures guarded an altar and a robed high priest. As one, the knights charge through the skeletons as a scythe through wheat and crashed into the defenders at the altar. A mage hidden among the skeletons invoked a prismatic spray which weakened the knights. While the elven rangers skirmishes against the drow, the knights dispatched the ogre skeletons near the altar.

The true threat soon manifested. A fearsome Marilith appeared from nowhere next to Sir Jorstag, swords striking in a blur. The brave knight fell, and both his comrades and the Marilith thought him dead. Determined to avenge is fallen comrade, Sir Dorian faced the demoness but he fared no better than his comrade. Only the healing touch of Florian saved his life.

Sir Dorian recovered, and swore vengeance for his fallen friend. The remaining knights charged the Marilith. Surprised at being bloodied by mere mortals, she assessed the situation and prompltly vanished from from the field. The remaining enemies were dispatched without much difficulty.

Once again, Sir Jostag survived grevious wounds, and his scars will serve a reminder of his courage and fortitude. Some elven survivors were found alive after fight. They told the knights that the demoness had prepared a trap for them.

There appeared to be a difference of opinion between Rumiziel and his friends (who used white fletchings on their arrows) and some of the elves survivors (who used red). The reason for this is not known to the knights, but the fact the the elven ranger specifically mentioned the white fletching on his arrows prior to the battle is noteworthy and cause for some concern.

The treasure listed below has been added to the loot bag.