In which demonic forces once again attack Cormyr.

As the end of the Year of the Cauldron (1378 DR) approached, winter came once again to Cormyr. The heroes had returned to their estates and enjoyed some well deserved time with their families. The marital bliss at Thornhill Manor was rudely interrupted interrupted when a hezrou attacked Sir Dorian and Lady Mabel in the middle of the night. Since he kept his trusty sword near the bed, he was able to dispatch the demonic intruder with little difficulty.

Sir Jorstag and his wife were ambushed in a similar manner by another demon. This cowardly vrock had found it necessary to protect itself by a mirror image spell, a reasonable precaution when attacking Cormyr's greatest knight in his keep. Needless to say, this trickery availed it naught and the avian demon was soon slain. 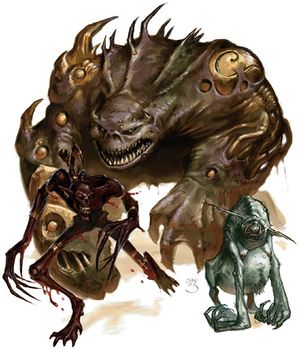 A balor burned down Iordan's house in Suzail, and Castle Stierheim was attacked by a horde of lesser demon. The heroes soon learned that while they had apparantly been targets of some importance, hordes of lesser demons also roamed the countryside in the dead of winter.

Mariza Delhumi, the prefect of Arabel was slain by unknown assassins at this time, but it is unknown if this was connected to the demonic invasion. Though unknown to most, Asmund Prospero was coerced to return to intelligence work and take on some of her duties.

Knights, yeomen and adventurers rallied to defend the Forest Kingdom. Among the heroes was the paladin Cassilda who had left the Dalelands for Cormyr since much evil was found in Tilverton and other places. After about a month, the demons are defeated or return to the abyss on their own. A later investigation located a number of spawning grounds for the demons, and at each one of the stolen cauldrons is found melted to slag.

The demonic sourge was the subject of much discussion at the Parliament of Peers[1] Year of the Cauldron [2] (1378 DR). There was call for action, but the country could do little more than patrol the countryside and be vigilant.

The chance to strike at the demonic invaders did not present itself until the beginning of the next year (1379 DR). The elven ranger Rumiziel appeared at Thornhill Manor, wounded and with a handful of elven surviviors. Their community had been attacked by demons, drow and undead led by a powerful marilith. Sir Dorian summoned his comrades in arms and the heroes prepared to once again face demonic invaders who defiled their beloved homeland with presence.