In which in which the heroes put and end to a series of arsons, and an agent of an unknown power is brought to justice.

After a few days as the guests of count Valdiir, the knight left for Suzail. They were hailed as heroes along the way, and were greeted by cheering crowds then they entered the royal capital. The heroes generously decide to give half of the vast treasure to the crown. The royal court was still at the summer palace outside the capital. The knights returned to their estates while the paladin and mage remained in the capital to serve on the council of regents. During late summer, there were many from the magic academy. The students had been recruited by young errant knights, who were no doubt inspired by the heroic deeds of Sir Dorian, Sir Jorstag and Sir Klaus.

After a few months in Sembia, the ambassador, Duke Ayesunder Truesilver returned and reported to the council of regents. The conflict with Sembia was over and all trade restrictions had been lifted. The embargo was not popular among the major merchants houses and nobles. The chief instigators had been lesser merchant houses who had perhaps hope to gain from war or trade embargo. In any event, the status quo had been restored at little cost to Cormyr. 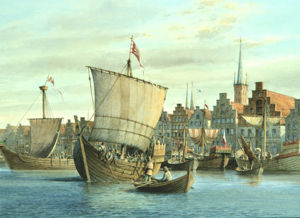 The Shamrock in the harbor of Suzail.

Autumn passed uneventfully and peacefully. This came to an end when Asmund Prospero appeared at Iordan's club. He had fled the Cult of the Dragon when they had disbanded their operations in Cormyr. Junior members han been killed in order to silence any witnesses. The former agent had barely escaped with his life. After two years under cover in the cult, he was a bit frazzled. Asmund was debriefed by the secret service. The heroes had destroyed too many cells which had made operations in Cormyr unfeasible. The Cult of the Dragon was no longer an attractive partner for other evil, and they had lost important allies. A compendium of useful intelligence on the cult was compiled and published. Word of the defeat of the cult spread trough the country, and there was much rejoicing.

Soon, news of defeat of more cultists came from the west of the Storm Horns. Many the former adventurers had established keeps of their own and brought a measure of stability to the area when evil and monsters had been driven out. 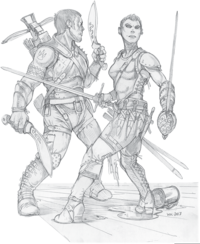 During the autumn, many of the largest kettles and metal basins in the kingdom had vanished or in some cases been stolen. In one case the culprits were goblins. Iordan called upon his most powerful magics and was able to discerns the location of the missing kettle from the Three Harps was in the abyss! Further research indicated that the were probably in the realm of Orcus, demon prince of the undead. The mage hypothesized that these might one day smuggled back in order to cause trouble. The constabulary was instructed to report if any if the missing kettles reappeared. Had the cult of the dragon escalated the problem? Perhaps they had asked greater allied powers for aid. The theft of kettles stopped as winter came, and nothing came of the matter.

A series of arson occurred. Florian investigated and came upon a suspicious individual who had torched a dwelling. The paladin talked him and brought him in for questioning. The perpetrator had been paid a pittance by a stranger to start fires. He was paid and told to make himself available for more work.

Next day the arsonist whined and asked for handouts at his usual drinking spots while Florian kept him under observation. He was approached by the local thieves guild and arrangements were made to track other arsonists and their employer. A few days layer a nondescript stranger appeared at temple and informed the paladin that the man he sought was aboard the Shamrock, a Sembian cog moored in the harbor of Suzail.

Florian boarded the cog and ambushed the arsonist on board the cog. A deal was struck with the captain who took the passenger's chest but only after Florian and Iordan searched it. They found letters of credits issued by smaller merchant houses in Sembia. These were perhaps the same houses who had instigated the recent conflict between Sembia and Cormyr. After the captain had taken possession of the letters, he allowed the two heroes to take the prisoner.

The objective was to cause unrest by arson in Cormyrean cities. The agent and several arsonist were publicly executed. Should the crown choose to, Cormyr had casus belli against Sembia. This proved to be the end of the arson. Had the Cult of the Dragon dragon infiltrated the Sembian merchant houses? Were the instigators war profiteers in Sembia? This will perhaps become clear in the future.