In which the knights find the dragon's lair.

The heroes left the swamp and returned top Castle Valdiir. Sir Jorstag was still weak and in need of medical care. [1] They carried with them trophies from the slain dragon, such as its head and skin At astle Valdiir, a council was held with the Count. The drow had apparently come from Cormanthor in the north. While some drow had escaped, there was still much cause for celebration. There were fewer bandits and monsters in the swamp, and the keep could be repaired and garrisoned.

The dragon's lair had not been found. One of the benefits for dragons to join the Cult of the Dragon was loyal minion to guard it's lair. If it was found, it would mean treasure and more importantly cultists to fight. While the knights recuperated, Iordan summoned a dozen angelic hound archons and sent them into the swamp to locate the lair. Soon, two of them returned and reported that they had seen two bands of drow who fought each other. By clever use of a scroll of teleport and a ring of spell storing, the heroes and their mounts were able to teleport to the vicinity of the battle. Florian and Sir Jorstag and Lex landed off target at the edge of the swamp in Sembia.

Sir Klaus, Sturm, Sir Dorian and Iordan arrived near the drow. They heard muted sounds of combat, and prepared to engage the enemy. One of the archon agreed to serve as dire wolf mount for sir Dorian. Two groups of drow fought each other, male versus female, with the advantage to the latter side. Two fireballs cleared up most of the noncombatants and left only a few standing. Sir Dorian engaged the female leader while sir Klaus charged the remaining males. The drow priestess barely survived Sir Dorian's charge, and used a word of recall to make good her escape. Some treasure was recovered from the field of battle. This was mostly lesser drow wargear, styled differently for the male and female groups. The meaning of this difference is not known. Canoes were found near the site of the battle, indicating that the some of the drow had come from within the swamp. After taking care of the spoils of war, the heroes made camp and dined on drow wine and victuals. 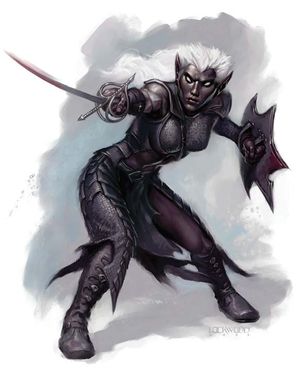 Sir Jorstag Florian rode to sir Dirlars keep with sir Dorian's mount in tow. The household troops were surprised to see Cormyrean knights. sir Dirlar nevertheless welcomed the heroes as honored guests to his keep. They exchanged stories, that is to say bragged, about their heroic deeds. Sir Dirlar was no stranger to battle against the evil dark elves. Their host readily agreed to ride with them to the swamp. Their campsite and food were somewhat better than that enjoyed by their friends in the swamp.

In the swamp during the knight swamp goblin Blorp wanted. By means of magic the two groups agreed in Sembia encountered a band of adventures who knew of a dragon lair in the mountains near the swamp.

Ad it turned out the lair was on the Cormyrean side of the border. Sir Dirlar could not in good conscience cross the border, so they parted as friends. In Coryr, they encountered a band of adventurers who knew of the dragons lair in Copper Gulch to the north. By judicious use of sending spells, the heroes made arrangements to converged at the edge of the swamp.

They hade barely joined forces and set out for their destination when they heard sounds of battle. The knights clashed into a group of zombies who were fighting a band of peasants. Aided by his true seeing spell, Iordan spied a cult wizard who was herding the zombies. Determined to thwart the knights, the hidden cult wizard fires a wand of fireballs into the melee, killing many of the brave peasants. The cowardly wizards and remaining zombies were soon slain. After the battle, knights confiscated the treasure on the cart, and paid the peasants, adventurers and goblins. The peasants had learned that the cult were cleaning out the lair and had decided to ambush the convoy. According to them, a dragon was still guarding the lair. Perhaps the slain dragon had a mate in the lair?

Since Sir Klaus had missed out on dragon melee earlier he was keen to get a crack at this one. he rode first and the other knights follow. Cave is guarded by a scrag but the dragon turns out to be an illusion. Klaus charges the scarfs and more trolls emerge from the swamp. Once they are slain the knights ride into the cave. Two armored ogre zombies guarded the interior of the cave. No magic loot but plenty of treasure ad eel as a dismantled laboratory.

The cultist had probably looted the lair three or four days ago which means there was little chance of finding them. One thing of note was measurements for a half dragon plate armor.[2]