In which the knights slay a black dragon and drive the drow from the Vast Swamp.

Florian scouted the keep while the knights waited out of sight. The lithe young paladin moved stealthily onto the keep past the scrags. Among the shadows, he spied zombie warriors in heavy armor. 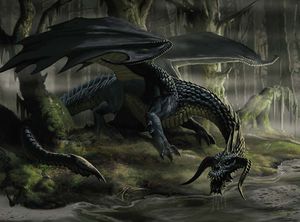 A black dragon dwelled in the Vast Swamp.

Suddenly, a black dragon and several mirror images of it swooped down and breathed a stream of acid which struck the young palading. He responded by unleashing a volley of arrows as the wyrm flew away. Sir Jorstag entered the courtyard and was greeted by a flamestrike from hidden cleric. Scrags on the perimiter broke through the surface of the swamp water as they were magically grown to huge size. A scrag of unusual size, no doubt their leader, charged sir Klaus.

As the dragon banked and prepared for another attack run, the heroes took to the air on flying steeds[1]. Hidden drow crossbowmen. Sir Dorian and Sir Jorstag charged the dragon while Florian unleashed a storm of arrows against it. The wounded dragon tried to escape, but fell to a well-aimed arrow.

The heroes had no time to savor their victory, for they were beset by crossbow bolts and necromantic magic from the drow hidden in the swamp and the ruins of the keep. Aghast, they watched helplessly as Sir Jorstag was enveloped in flames and crashed to the ground. Vowing revenge, the heroes descended to the ground and engaged the enemy. Several followers of Velsharoon died in the keep, along with a drow wizard.

Sir Klaus valiantly engaged a dozen scrags on close combat and felled their leader. With the dragon and many of the scrag dead, the drow leader and the remaing soldiers abandoned the keep and fled into the swamp.

The heroes had wrested the keep from the drow and slain a dragon, and there was much rejoicing when they learned that Sir Jorstag had survived against all odds.

Acerbus the cleric of Velsharoon