Death of a Regent

In which the regent dies and Suzail burns.

They had met Markvart and were traveling towards Arabel. During the knight, Jorstag spied a reddish glow towards the south. The brewing plot was a matter of great concern, for if the nobles pressed their claim for regency, the result might be civil war.

The knights soon learned that the Cult of the Dragon was not content to sit idly by when their plans were foiled. Fearing the worst, he woke his companions. All agreed that the ominous light came from Suzail. Was the royal capital on fire?

After a brief discussion, they decided to leave their retainers with their mounts, and teleport to Suzail. Iordan's magic brought them safely to his courtyard in the capital, but the city itself was far from safe. Hordes of undead stalked the panicked townsfolk, and the the Purple Dragons had not been able to mount an effective defense. The heroes decided to gather what intelligence they could, and ascended to the rooftops. At first look, it appeared that the palace hand been destroyed. Iordan summoned several archons, which were dispatched to scout the palace and other location.

Dorian decided that the life of the crown prince was their top priority. He instructed Iordan to use a sending scroll [1] The prince lived, but was terrified, and is mother was dead. Aided by Iordan's magic, heroes flew towards towards the palace above the fleeing people.

They made brief stops to aid besieged purple dragons, and fight a zombie giant which was no match for Markvart's enchanted morning star. A commotion outside an inn was caused by a group of young rakes who proved more than a match for the undead hordes. The boldest of the defenders was Taran Huntsilver, Dorian presented him with his trusty longsword[2], and Jorstag gave him a potion of strength. Thus fortified, the young noble swore to do his utmost to rally the townsfolk.

They landed at a square near the palace where a group of Purple Dragons had made a stand.They informed the knights that Princess Alusair was dead, her life snuffed out by an undead dragon's chill breath. This was indeed a sad day for the Forest Kingdom.

They were rudely interrupted by a huge undead dragon turtle which literally burst trough the ground. It's chill breath slew the brave soldiers instantly, and sorely wounded the heroes. This was clearly the beast that had slain the regent and demolished the palace. Dorian ordered the knights to charge, nut courage and skill at arms and magic availed them naught. Sir Dorian was paralyzed by the dragon's poisoned bit, and while Sir Markvart and Sir Iordan were still on their feet[3], they were near death. They would surely have perished if not for Iordan's magic which transported them back to his house. Florian remained behind, and stalked the dragon's master until he could slay the necromancer with few well placed arrows. He then proceeded to the palace to look for the crown prince.

The knights a Iordan's house had barely healed themselves before they heard troops march in the street. Hundreds of skeleton in heavy bronze armor marched under black banner. They were lead by a dread death knight who could only be general Blackskull. The heroes parlayed under a flag of truce. The general though little of the kingdom, and and called Sir Dorian a traitor on account of his coat of arms[4]. He nevertheless agreed to talk to them. Iordan presented the death knights the enchanted box with the message from Aran. The general agreed to cease his hostile actions against the city. Later in the night, his troops could be seen fighting the Cult of the Dragon who had tricked him into serving them.

Iordan vanished and reappeared at the castle, where he and Florian searched for the prince. In the end, a summoned earth elemental freed the prince. The heir to the kingdom lives, but only time will tell if he will gain his throne. 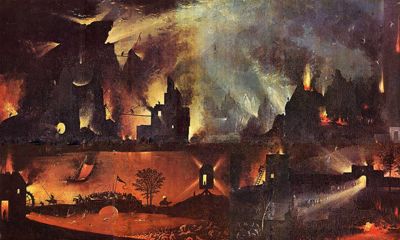 The undead march through the burning capital.