In which the knights capture the bugbear brigand Wurgan and make a promise to Baroness Munker.

The knights defeated a band of veteran goblin marauders led by bugbears. One of them wore a suit of full plate aror. This was clearly no ordinary bugbear brigand! The knights engage their opponents, and soon the bugbear leader Wurgan the Terrible yielded to Dorian. Most of the goblins were killed or ran away, but some were captured. Upon closer examination, the knights discovered that the armor bore the arms of de Mornay. The knights took the captives the nearest city and left the prisoners in charge of Baron Munker's guards. The heroes were feted by Baroness Amelia in her husbands absence. 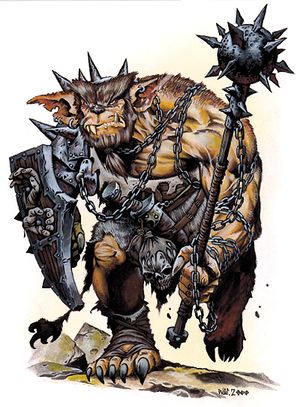 The heroes gave sworn statement against Wurgan, who is hanged the next day. The Baroness informed the knights that the de Mornay estate lies to the north-east and askedthem to return the armor and carry a message to her husband. Before they left, she told the knights in confidence that some of the knights to the north are less than honorable. Some are common robber knights, but others may be agents of foreign nations or dark powers.