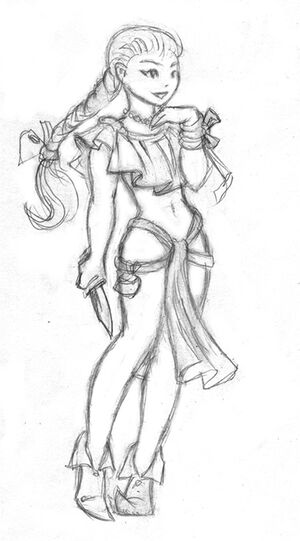 She learned that her real name is Sandeli Foxglove when she met her brother but only after he had been turned into a ghoul.

Nell thought she was born to poor parents in Magnimar, when in reality she had a bad foster home after her parents killed each other as a result of a haunting. She ran away when she was seven years old.

She lived on the streets off alms and what she "found". When growing older it became less easy to get alms and she turned more and more to making use of things others didn't use... or left unattended.

She only once actually cut a purse and had a whole lot of guilt for it later. It was harder when she had seen who she stole from. She knew that the victim wasn't that well to do either.

When she started developing feminine forms, she noted that that got her attention from men. She started to take better care of her looks and got men to freely pay for food and drinks just to have her around.

She found out that adventurers and well to do merchants was the best company and soon she had perfected her techniques. Sometimes she fell in love with her "victims" but it seldom lasted long.

She had seen how people acted when drunk and had always stayed away from alcohol, but one evening some months ago she got too drunk and was raped by a nobleman. When she complained to the city guards they dismissed her. It turned out that the nobleman was in fact Justice Ironbriar. A week later there was a break in at his house and some valuables were missing, but the biggest financial hit was the enormous painting of the nobleman himself that had been slashed and the face cut out.

After that incident she was a lot more careful when choosing who she accompanied. Fortunately she had just come to some funds at that time and had a choice. After her run in with the city guards she didn't trust them and was constantly on the lookout for the nobleman. This was bad for business and shortly after she traveled with a merchant, Bassanio to Sandpoint.

Since then she has been flirting with the locals and living of the last of what she found at the nobleman's house and the gifts that she got of Bassanio who was exceedingly generous after an unusually good affair he had done.

Her story continues in diary.

She is writing plays of her adventures. Thoughts of their format is gathered here Family Secrets

Nell is a rather small human of mixed origin. She has dark blond hair but her skin doesn't have the light complexion usually associated with blond hair. She most often has a tan that shows several slight scars seen as lighter lines.

She dresses provocatively in just enough fabric to be covered. She has two daggers on her back between her shoulders to be drawn downwards. They're usually hidden by her hair but when she expects trouble she puts her hair in a long plait to be out of the way. She also uses a sling that she wears wrapped around her left lower arm.

She smiles a lot which shows her dimples and flirts with most men she meets. She used to be troubled, hiding it behind the smile, but since she faced her demons, or rather defeated Ironbriar once for all, her mind seams lighter and her troubles are of a more mundane nature, like what to do about the latest rat problem in Turtleback Ferry.