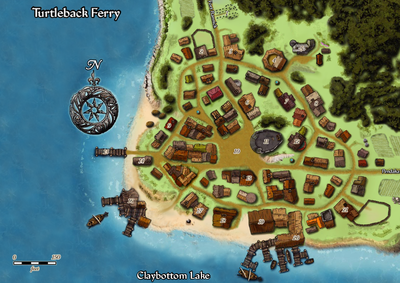 Turtleback Ferry is a small township of almost 450 inhabitants, mostly humans but there are some gnomes and halflings. It's perched on the rain-drenched north shore of Claybottom Lake and climbs the slopes of the low mountain to the north-east. Three distinctive ferries crafted from the shells of giant turtles slain by Autek Lavendy, one of the town’s founders, make Turtleback Ferry the central trading town for the region.

Nearly 80 miles from the next town of equitable size (Ilsurian), Turtleback Ferry has nominally been under Magnimarian rule for 45 years, an arrangement the settlement agreed to in return for protection from the region’s ogres and ogrekin. Yet Turtleback Ferry remains independent in many ways, for its remote location ensures that official visits from Magnimar are few and far between. Since the fight for Fort Rannick, Magnimar has appointed a baroness to handle the settlement, but she let the former mayor keep his position and he handles the local management as she travels a lot. Turtleback Ferry’s mayor is an aged cleric of Pelor named Father Maelin Shreed, a selfless soul who tends to the village church as both a safe haven for travelers and a hospital wherein he tends the village’s sick. Turtleback Ferry boasts several commercial buildings as a trading post, an inn, a tavern, and a smith.

Most of the village’s other buildings are the homes of farmers, hunters, fishers, and trappers. Visitors to Turtleback Ferry find the locals friendly enough, although many of them seem nervous and skittish, quick to lock their doors at night and often overreacting to the sound of dogs barking or other unexpected noises.

The wilds nearby (particularly Kreegwood) have grown more dangerous. Wild animals like bears, firepelt cougars, and boars are becoming increasingly common along the edges of these woodlands, and several of Turtleback’s hunters and trappers believe these predators are being forced from the depths of the woodlands by the increased activity of local monsters like ogres, trolls, and worse.

Just north of town is the graveyard located. It holds the graves of the town's founders but no others of note.

Old man Jobe owns the stable where he buys, sells and rents horses, mules and donkeys. If you have the time he can tell you stories of his youth when he was a trapper traveling Kreegwood. His stories always end making the point that having a good mule saved his life.

This is the newly opened tavern owned by the new baroness Sandeli Foxglove. Her personal cook, Kaven Windstrike, makes the Noble's food available to all that can afford it. The dishes are pricey but still good value as they are quite large and made using the best quality ingredients available and exotic spices. It's only open when the baroness and her cook is in town.

At the edge of town a strange wooden building rises. It is a theater built by the new baroness. The Globe is a two-story, open-air amphitheater approximately 70 feet across and can house up to 400 spectators. The Globe is an octagon of eight sides. At the base of the stage, there is an area called the pit or yard, where, for a copper piece, people can stand on the rush-strewn earthen floor to watch the performance. Around the yard are two levels of steeply raked seating, which are more expensive than standing room.

A rectangle stage platform, also known as an 'apron stage', thrust out into the middle of the open-air yard. The stage measures approximately 30 feet in width, 20 feet in depth and is raised about 5 feet off the ground. On this stage, there is a trap door for use by performers to enter from the "cellarage" area beneath the stage. Large columns on either side of the stage supports a roof over the rear portion of the stage. The ceiling under this roof is called the "heavens," and is painted with clouds and the sky. A trap door in the heavens enables performers to descend using some form of rope and harness. The back wall of the stage have three doors on the main level, with a curtained inner stage in the center and a balcony above it. The doors enter into the tiring house where the actors dress and await their entrances. The balcony houses the musicians and can also be used for scenes requiring an upper space, such as the wall in the Of goblins and ghouls, act I, scene II.

A surprisingly lavish house for such a small frontiers town, this is the manor where the Baroness Sandeli Foxglove lives. It overlooks the town from the slopes but is a little secluded from the rest of the town. It includes a garden, although not well kept, in season there are lots of foxgloves growing there. There's also an outhouse and a small cabin for the gardener.

The family Kramm have been trading furs for as long as Turtleback has existed. They buy pelts from trappers and either make fur coats or sell them as they are shipping them off to other towns. They also make other clothes, usually very robust. The house is one of the oldest after the church and passed from father to son for many generations. The men are easy to spot with their orange hair and freckles but the latest child is a little girl, Tabitha, who also shares the same look.

The baker, Aram Barlom, have for long specialized in dark sourdough bread and biscuits well suited for long travels, but he is getting old. When his son died, his daughter-in-law more or less took over the business and his two grandsons are experimenting with pastries, to his great dismay.

Elora is Turtleback Ferry's candle-maker who also makes soap. She uses both wax or herb oils and tallow. There are scented versions of both candles and soap. The tallow and fish oil is used to make heavy duty soaps best suited for laundry and textile usage but the herb oils used together with perfumes from Sanos forest makes wonderfully scented washing soaps. Those are known as far away as Magnimar.

The school is a small riverfront house where Tillia Henkenson can be found instructing her class of young boys and girls. She is very protective of her flock. The original ferries made from turtle shells that gave the settlement its name are placed outside and their story taught to the children.

The square is often filled with stands where fishermen and trappers sell their catch, but you can also find groceries from nearby farms, freshly baked pies, perfumes and other more exotic items brought in from the gnomes in Sanos Forest.

Father Maelin Shreed, an aged cleric of Pelor and a selfless soul, tends to the village church that is also used as both a safe haven for travelers and a hospital wherein he tends the village’s sick. It is a sturdy stone building among the oldest in town overlooking the square.

There are several brothels in Turtleback Ferry, serving the needs of the men and women of the frontiers, but this is the most renown since The Paradise's Gate burned. It's a combined gambling hall and brothel where many trappers have lost much money. Maelin Shreed have long tried to get it closed, but without any wider support his pleas have been ignored.

The very ferry that gave the small town its name docks here.

Turtleback Ferry also boasts a trading post that is well equipped to handle most needs that arise from farming, fishing and hunting, but there are other things available as well, the candy ranking highest among the children, if they get their hands on some coins. This is a two story stone house with a sturdy door to stop break-ins.

This tavern is frequented by visiting hunters, trappers and scoundrels looking for drinks. Bar fights are not uncommon but are usually broken up by Vorn, the well grown owner. You can get food, but the usual stew is usually only ordered once because of its taste.

Fishing have long been important to Turtleback Ferry. The catch is sold either here or on the market in the square.

The smith Irontooth is a very good smith when he isn't hung over, but even then he gets by if he only can endure the noise. He visits Bottoms Up most nights.

This inn has a calm atmosphere where weary travelers can refresh themselves with food, drink and entertainment. Usually music is played by visiting bards. There is a big common room and there are several smaller rooms on the second floor for the guests, a few with a beautiful view of Claybottom Lake. The nearby smithy usually quites down late afternoon as Irontooth visits Bottoms Up most nights. The owner, Yosnan Klava thinks of himself as better than most and has a superior attitude but most visitors don't even notice it.

The bathhouse have several tubs where you can clean up or just relax. Hot water is added as needed and most of the products from Turtle's Candles and Soap are available. The bathhouse also have a barber who often get to work on trappers or miners who have spent several weeks away from civilization. There are other services available too, like massage and more.

When merchants bring exotic wares from Sanos forest they bring it along the Old Sanos Trail and the Wicker Walk to Turtleback Ferry. In these warehouses it is then stored until it can be loaded onto ships or a caravan sets out along the Pendaka road.

The butcher is a small but surprisingly strong halfling woman who, with the help of her two cousins cuts enough meat for the towns need. They keep livestock in a pen in the back.