The stairs ended in a cave. Iesha continued on and as the tunnel she led us through was wider than the hallways above, we gathered closer walking around her. I had a bad feeling about those caves and sure enough there were ghouls hiding along the walls trying to ambush us. I threw my dagger into one making his black blood pour out. I then moved to the other side of our group next to Nathaniel. The ghouls gave out a cry and charged us. One attacked me, his strike pinning me in place with fear, but my new cape made sure I disappeared and appeared a few yards away. It completely fooled it making it vulnerable to my attacks. I used it's confusion to throw my dagger into its back causing a deep wound. Nathaniel easily killed the heavily wounded monster. Honeypot played a melody that made every one of us dance. Even I stumbled a few steps even though I felt shaky and my legs could hardly carry me.

We were killing off the ghouls and winning the fight, but Iesha never stopped or cared about the battle and we were loosing contact with her. I threw my dagger again but lacking any good opportunities I missed. I looked around but couldn't see any more enemies. Feeling a little safer I steadied myself. Unfortunately soon there were more ghouls coming from the way Iesha went. Honeypot ran past me into the middle of the new ones and exploded in light. Nearly all of the four new ghouls were dazed by the effect. I threw my dagger into one of them wounding it severely and used the confusion to sneak into a corner of the rock walls and hid. The ghoul I wounded charged passed me. Velicia joined our fight charging past me the other way and into the middle of the remaining ghouls attacking the one that avoided Honeypot's effect. Velicia was bleeding and looked very worn down so I moved quickly around a ghoul to get to her, once again thanking Honeypot for the lightness of my feet, pouring the last of the healing potions I got from the group into her. While throwing my magical dagger into one of the ghouls I saw Honeypot disappearing into a dark tunnel following Iesha. Nathaniel joined in and struck down one of the ghouls and I stabbed the last one destroying it. I quickly and quietly followed Iesha and Honeypot into the darkness.

The tunnel soon opened up into a big cavern with a strange glowing pool, vaguely visible, deep down in the middle. The rest of the room was left in darkness. Honeypot had whispered that there were goblins in the pool below the surface, but I didn't see any. There was a way leading up from it spiraling around the whole cavern. Following the rough cliff wall to my right I started down the way and soon caught up with Honeypot. Iesha was right in front of her too. Nathaniel stormed into the cavern lighting some of it with his burning sword. There was a load crash as Iesha easily smashed down what must have been a heavy door, judging from the sound. She disappeared into the opening. Honeypot followed Iesha in but I kept a watch on the pool and when some strange deformed ghoulish goblins exited it, I threw my dagger in the back of one of them rushing toward Nathaniel, before I followed her through the door.

When inside the door I hid in a short, dark tunnel before continuing stealthily down the tunnel toward a candlelit cavern where I heard fighting. When I peeked around the rough stone wall next to Honeypot I saw Iesha furiously attacking a strange looking monster that vaguely reminded me of Aldern. He had no hair, big pointy ears, greenish skin and a very long tongue. He had obviously turned into a ghoul, but still wore fine clothes. From next to him he grabbed a painting and held it up to Iesha. It was very much like the one we had seen hanging facing the wall. Iesha screamed and lost most of her spirit when faced with the picture of herself alive, opening up to his tongue attack. I thought of throwing my dagger into him, when Honeypot stepped right out into the room.
"You came to me! Let us consummate our hunger." Aldern said.
"What are you doing with that wench?" she answered, approaching him.
Hopefully she had some kind of plan. I was still hesitating when I heard something behind me. Quickly I stepped out into the tunnel and threw my dagger into a surprised goblin ghoul killing it. I hid near the entrance again. Nathaniel joined us in the room entering with his confident stride and surveyed the scene.

Iesha seemed to cower from the painting and lost some initiative in the fight she had been winning, but still managed to tear at him with awful looking claws. Aldern on his part didn't loose spirit as he called his minions to come to him and assailed his dead wife with blows and tongue. Honeypot used that moment to walk up to Aldern grabbing the painting he was holding, bringing it up next to her looking angrily at him saying
"Are you still hanging on to her?"
He let go of the painting as if it was burning him. Honeypot turned and ran behind Nathaniel who advanced to attack.

The goblin ghoul I just killed raised up, but I was too much in the fight to get scared then. I ignored it, taking a few steps forwards while it flailed wildly, missing me. Instead I concentrated on my dagger, activating it's magic. I threw it hard, hitting Aldern in his belly. As it returned I immediately threw it again this time hitting him square in the chest. He fell to the ground gurgling. 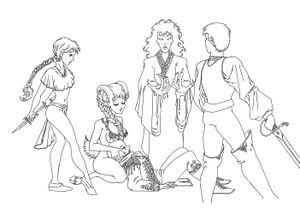 "Argh... Save me... The Hunter is coming for me... He's riding me... Help me..."
He hold out a hand towards Honeypot who couldn't resist but ran up to him taking it. Noting that the fight was over Nathaniel left the room, telling me
"Make sure he's dead." as he passed.
I ignored the goblin ghoul who tried to attack me and joined Honeypot at his side.
"Where are your sisters?"
"The Skinsaw cult own me... They manipulated me..."
"Your sisters? Tell me!"
"One married and moved to the Greater Kingdoms... The other was taken by Ironbriar..."

Then he was interrupted by Iesha attacking him, killing him and as he died she turned to dust. Honeypot ran out to the others. I started following with a heavy heart and killed the goblin ghoul on the way out. I was filled with questions.
Was I the little sister of Aldern?
Was there any truth to Dorothea's joke?
Have I just killed my own brother?
What about my parents in Magnimar?
Was my memory from the nursery my real memory and not one of the strange spooky things this house did to us all?
I was taken by Ironbriar, but I escaped.
It might just be true.