In which the heroes slay a fearsome werewolf troll.

The heroes continued with Florain and Rumiziel in the vanguard. Tehy found a clearing in which a party of elven rangers had been massacred. They spotted movement in the woods on the far side of the clearing. Without a thought for their own safety, Sir Jorstag and Florian spurred their mounts and pursued the foe. As they came closer, they saw that it was a huge, feral troll. It turned to face its pursuires, its flesh twisting into a lupine form. This was no ordinary troll, but a feral troll werewolf! Surely it was the product of the Wolf Queen's twisted magics. 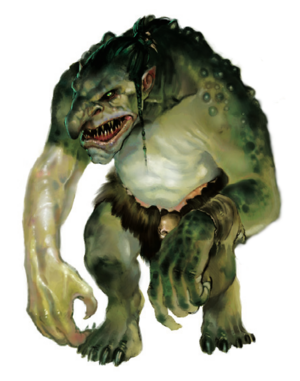 Sir Jorstag and Florian banished and thoughts about the unnatural origin of the beast and prepared to face it. Before the brave knight could impale the troll on his lance, the beast pounced! It landed on Sir Jorstag, its wicked claws tearing through Cormyrean steel as if it were but parchment. Sir Jorstags blade and Florians silver arrows wounded the troll grievously, but it was clear that this was a fight that the two heroes could not win.

In the clearing, Sir Dorian and Sir Klaus were ambushed by a summoned earth elemental and two treants. They managed to dispatch them easily enough, and it was clear that the ambush was a delaying tactic. Sir Klaus rode into the forest and found himself under attack by a treant. His trusty morningstar proved of not much use, but put the axe Rumiziel tossed him to better use.

From forest Florian cried out "Save yourself, brave Sir Jorstag!". A storm of silver arrows distracted the troll and allowed the wounded knights to escape the treacherous forest. The heroes formed up and prepared to face the inevitable attack by the nigh unstoppable troll and the remaining treant. The troll leapt through the air and grappled with Sir Dorian. In spite of the monsters tremendous strength, the knight freed himself. He smashed the monster furiously with his silver moriningstar and managed to ward off several swipes of dagger-like troll claws.

Sir Klaus broke off from the fight, and wheeled his mount around in preparation for a lance charge. He crashed into the treant, turning both his lance and the ambulatory arboreal abomination into kindling. With the treant threat negated, the heroes came to the aid of the beleaguered Sir Dorian. The concerted efforts of all three knights and scores of silver arrows from the skirmishing paladin and elven ranger finally felled the foe.

The victorious heroes incinerated the fallen troll, but were able to keep its fangs and claws as trophies. After a few days of rest their wounds had healed, and they continued north. Perhaps they could recover arms and armor from the ruins of Tilverton that allow them to stand against the undead dragon. During their rest, Sir Jorstag received a sending from Prefect Marisa of Arabel. She informed him that the followers of Velsharoon no longer aided the Cult of the Dragon in the North. Her agents had informed her that the Cult had new, as yet unidentified, allies. 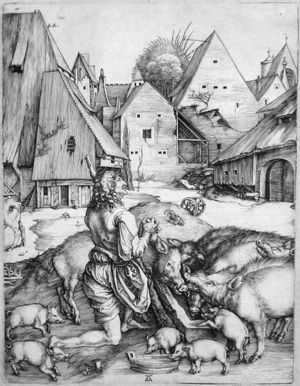 The heroes crossed the border into Felsenmark on their way to Castle Lombard. Along the way, the met barbarians and local farmers told them that evil things came crawling in the night, and that an evil angel was stalking them. No-one had actually seen them, but something was definitely amiss. In time, they arrived at Castle Lombard where they were welcomed by Countess Juno. The young Countess appeared to take her duties seriously, as evidenced by her full plate armor and studies of maps and historic battles. After gorging themselves at the feast that was held in their honor, the knights retired to their quarters. For the first time in weeks, they slept in proper beds inside solid castle walls.

Next morgning, Countess Juno received words that the village of Farer's Crest was under attack by demonic forces. A scruffy farmer named Skrundolf had barely escaped with his life. He was an outcast who lived outside the village since he berformed low tasks such as castrating pigs. He fleed the village when it was attacked, and brought word to the Countess. The loyal, if malodorous, Skrundolf readily agreed to guide the knights to his village.

The beleaguered village had indeed been overrun by a veritable horde of demons. The villages had sought refuge in the church, and a horde of dretches swarmed over it. A huge spider demon fell to Florians arrows. The leader was a vrock, who wore a tabard with an unknown demonic rune. The demons were clearly the new allies of the Cult of the Dragon. The three knights charges the avian demon and struck as one. Impaled on three lances, the vrock squawked pitifully before fading away. The knights then turned their attention to the horde of flatulent wretches.

The knights had barely dispatched the dretches when a knight appeared. He wore black armor and his shield carried the same unknown symbol as the demon. His glowing red eyes showed his undead nature, as did his battle cry: "Curse this undead servitude!" Before the undead knight could charge, Florian felled his horse with a swarm of arrows. Soon, Sir Jorstag and his comrades in arms had dispatched the knight. To their surprise, his body turned to mist and drifted off towards Tilverton.