In which the Cult of Dragon's assault on Marsember is stopped.

The heroes used the two weeks to make preparations for the defense of Marsemeber against the coming assault by the Clt of the Dragon. They knew not who were in league with the Cult, so they dared to confide only in trusted allies. 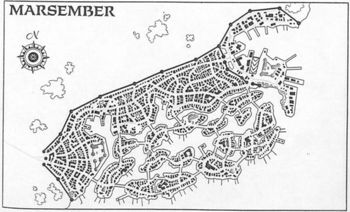 Map of Marsember. The Cult attacked the main harbor to the west.

Sir Jorstag rode to the royal summer palace near Suzail where the crown prince graciously granted him permission to carry the Purple Dragon standard. Florian enlisted the aid of Father Keitel for the divine protection of Siamorphe. Iordan penned a number of arcane scrolls. Sir Dorian surmised that the Cult of the Dragon would attack Starmouth Harbour to the east of the city in order to destroy the palace and other civic structures. The royal secret service an unused warehouse in the vicinity, and heroes gained entry into the city by disguising themselves as nondescript traders

A summoned spirit of the air was sent aloft to perform reconnaissance. At dawn, it reported a seeing the water in the harbor part as a huge, unseen creature approached the shore. The heroes knew that some losses were inevitable, but they could not alert the defenders until the cult were fully committed to the attack. Only then could they engage the foe.

The undead dracolich became visible as is started its rampage. Hundreds of undead emerged from the water. The dragon attacked the harbor master's office. Iordan delivered Sir Dorian's tactical briefing to Duke Maestoon Huntsilver, the lord of the city, and instructed him to marshal his forces. The knights sallied forth on flying steeds and charged the dragon. It collapsed moments after they rode past it, obliterated by the force of their charge, blessed arrows and fireballs.

Iordan's spell of true seeing let him discover an invisible cleric of Velsharoon behind the dragon. While he had been hit by the fireball against the dragon, he seemed to be warded against several of Iordan's favorite spells. This invisibility proved to be more of an annoyance than true protection, for the mage was able to guide Sir Jorstag and Florian to the cleric's location. Most of their attacks cut through nothing but air, but some of them rent steel and flesh, and the cleric was soon dead. Amazingly, the main threat of the cult had been neutralized in minutes.

Sir Klaus had spied a group of heavily armored skeletons who made their way to the bookstore of Kvasor the Antiquarian. The scion of Stierheim rode through the door and clashed with the skeletons. Unknown to him, a cowardly bugbear assassin and blackguard lay in wait, and he was caught in a deadly ambush. Dorian arrived soon after. With the store full, he was forced to dismount outside and enter the fray on foot. Sir Klaus was hard pressed by his assailants, and was soon grievously wounded. He was saved by the mage Iordan who used a dimensional doorway to extricate the brave knight from this troublesome encounter.

Dorian felled the assassin and several skeletons, and the arrival of Florian and Sir Jorstag was brought death to the blackguard. They went up the stairs to rescue the owner, but were surprised to see a skeleton on its way down, a mystic tome clutched in bony fingers. It was turned to dust by the paladin, and the tome was secured. They found the antiquarian in his bedroom, terrified but unharmed. When asked, their host professed his ignorance of the importance of the tome, for it had come into his possession but recently. Sir Dorian impounded the book for reasons of national security, and wrote a receipt for the antiquarian.[1]

The heroes have saved Cormyr's major port from the Cult of the Dragon, and decisively shown that the Purple Dragon Knights are well able to defend the realm. This should curb any plans Sembia may have had to intervene in order to protect mercantile interests. The remains of the undead dragon disappeared after it was slain, no doubt to reform in the manner of liches. It may return to threaten the kingdom in the future, but the failed attack on Marsember was a major setback for the Cult of the Dragon