In which the Exile army is defeated.

The cavalry rode to the main battle at Sentinel Hill. See below for a description of the battle.

The Battle of Sentinel Hill

General Delany had chosen the site for the battle well. He had placed the Loyalist forces on a low hill, surrounded by sparse woods. This was known as Sentinel Hill for the watchtower which had guarded the old border between Sembia and Cormyr in times past. The enemy had little choice but to attack uphill. As Baron Harmel's Exile forces began the advance, the Loyalist cavalry arrived from the east. The arrival of the cavalry reinforcements and the barbarians concealed in the woods meant that the Exile forces were now outnumbered. 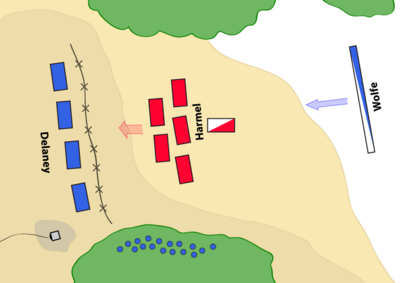 Initial deployment and direction of attack for the Loyalist and Exile forces.

Count Harmel's company held its ground while four mercenary infantry companies continued their advanced. The cavalry vanguard commanded by Baron Delnir turned to engage the Loyalist cavalry. Captain Wolfe sent his officers on the left wing, Sir Markvart and Baroness Kendall, to engage the enemy cavalry. Iordan rode with the cavalry, guarded by Sir Jorstag, while unleashing a volley of fireballs.

The right flank of the Loyalist cavalry wheeled in order to attack the Exile command company. As they prepared to charge, a wizard in the unit summoned two giant infernal centipedes. The charging cavalry narrowly avoided the vermin, but as they clashed into the infantry, the were soon attacked by monsters.

When the Exile infantry reached the Loyalist fortifictions, the barbarians swarmed out of the woods and tore into the left flank of the Exile infantry. The battle soon turned in favor of the Loyalists. Sir Jorstag made short work of the summoned fiends, and the mercenary wizard fell to Florians arrows. Sir Markvart fought Count Delnir, who was forced to yield. Count Harmel charged Sir Dorian, who fought the enemy commander to a standstill. The Count saw that the battle was lost and offered his surrender.

Result: Decisive victory for the Loyalists.

Losses: To be announced. About a dozen of the Loyalist cavalry dead.

Baron Delninr and Count Harmel are prisoners, and their fates have yet to be determined. The knights would to well to question them about their involvement with the Cult of the Dragon.

The Noble's War is over, and the mercenary companies in the Exile army are free to return to Sembia. A triumphant return awaits the knights and soldiers in Suzail.

The count yielded to Sir Dorian, and is his prisoner.

The baron yielded to Sir Markvart, and is his prisoner.

The mercenary wizard Lazidor was killed in battle.