In which the kingdom prepares for war.

The exiles had declared war on the nobles who now rules their ancestral lands. The call went out for brave knights to support the cause of Count Valdir and other nobles on the border. It was only a matter of time until Baron Delnir and Count Harmel mustered their forces and marched across the border. [1]

This was ostensibly a war between noble families, so the Purple Dragons and the Sembian army were not involved. This did not stop many knights from pledging their swords to Count Valdir's cause. [2] Indeed, even the Lord High Marshal, Baron Delaney, organized a small army which included the mercenary forces which had served with him earlier. Sir Markvart gathered some thirty hotheads eager for glory, while Dorian recruited a dozen knights from the Wolfe and Ironcrow retainers. 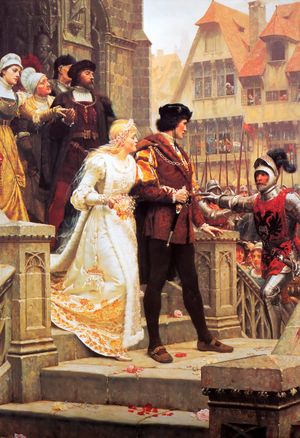 Sir Markvart carelessly remarked that Caldera was an older family than Wolfe, but could offer no evidence to support his claim. Sir Dorian choose not to make an issue of it since the coming war was of far greater importance than his friend's regrettable ignorance of the Caldera family history.

The knights joined the army camp and reported to General Delaney. Dorian's and Iordan's grasp of military impressed the general sufficiently to grant them command rank. Markvart's men had little experience, and asked Dorian to train them. Some of them proved to to be apt pupils, and the most promising was granted the honor of carrying the standard into battle. The small army was later joined by a barbarian warband from Felsenmark, led by the fearsome Othos.

Florian rode to the east to locate the enemy forces. He observed an enemy force (about two companies) that had encircled Castle Valdir. The main force was en route west, and it outnumbered the loyal forces two to one. Count Harmel is a skilled commander who had served in the Sembian army. This is clearly a formidable force. The loyalist forces do not face knights and men-at-arms alone. Florian also discovered a necromancer who had apparently defeated several dretches summoned by an unknown demonologist. The necromancer and his undead lieutenant fell to Florian's arrows, and the skeletons were turned to dust. Even though they were destroyed, the presence of necromantic and demonic forces in the war is cause for concern.

The general decided to force battle at a defensive location of his choosing. He will have the advantage of good ground and dwarven engineers, and decided that he can probably hold his position until reinforcements arrive. He gave Dorian command of a relief force to be sent to Count Valdir. With the recent disagreement between Sir Dorian and the Count in memory, [3] Dorian thought it prudent to ask for written orders. With luck, they will be able to scatter the enemy and reinforce the cavalry squadron with knights from the Count's fief.

The knights have a hard ride a head of them. They have to relieve the troops in the castle, and continue to the battle. The main force will have to fight one or two days without much of the heavy cavalry. Time is of the essence.