Barbarians on the Border

In which the knights meet their squires, take part in a tournament, and travel to the barbarian lands.

Markvart stayed at the tower in order to make a report to the army vanguard, and then made his way to the former Count's castle. The knights patrolled the county and informed the people that the traitor Count has been slain and slew any remaining undead they could find. There was much rejoicing. During their patrols, the knights learned that some of the villages were governed by barbarians. Gaiseric, one such barbarian chief, disparaged the regent by calling her a weak woman. He was promptly taught the error of his way by the honorable, if somewhat impetuous, Sir Jorstag.

At the castle, Iordan made an inventory of the books the Count had "collected" for sale to the barbarian. It appeared that the barbarian "king" Balnoc had a serious interest in Cormyr and had paid well for this knowledge. True to his nature, the greedy Count stole the books from his subjects and kept the money for himself. 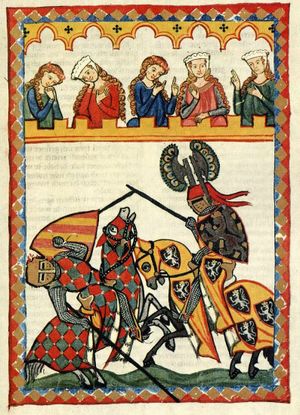 After a few days, Baron Delaney arrived at the castle. His forces now included the three mercenary companies the knights had encountered earlier. Delanay and Countess Esmeralda obviously knew each other. The nature of their acquaintance was not known to the knights, and both Florian and Markvart managed to annoy Delaney by making impertinent inquiries. The knights were summoned to the General's staff and made a report on the current situation, and were introduced to the three squires which had been sent to serve them. These young men were Armand Redgrave, a cheerful fellow of stout yeoman stock, the learned but sickly Cornelius Devette, and Nero Valaire who descended from a long line of Cormyrean knights.

(expand this bit) Tourney sponsored by the Countess. Baron Delany was eager to take part, but the knights convinced him that little glory could be won by the lesser knights. Archery content won by the ranger Bronson. A magic bow and arrow (loot from ghoul ranger).

The squires acquitted themselves well, as did the knights. No-one could stand against the mysterious black knight who unhorsed all his opponents. It was surely a coincidence that he appeared during Baron Delaney's absence.

Once the knights had recovered from the tournament, the General informed the knights that the regent had decided to send them on a diplomatic mission to the barbarian lands. Even if they were not successful, they would hopefully buy enough time for the army to move into position. The General surmised that the barbarians would try to cut off his supply route, but he had made plans for an alternate supply route. When the barbarians attack the invading army, they will not fight the starved opponents they expect.

The knights set out on their journey through the wintry north. They decided to bring one of the books, a chronicle of the Cormyrean kings as a gift to the barbarian chieftain.

They journey should take a week or two, but it was not long until they arrived at a village on the border. It was governed by Theodoric of the Eagle clan who welcomed the knights as honored guests rather than potential enemies. Much to the surprise of the knights, he bore a shield with a proper coat of arms. The knights found their host to be an honorable man, if not entirely civilized. He claimed that he ruled the village by right, since he was strong and the weak Cormyreans needed his protection. The knights held their peace and decided to not force the issue, even though he showed little respect for the regent Princess. Despite this, he decided to let his son Didrik accompany the knights through the barbarian lands. When asked about their adventures, the tale of the defeat of the Raven clan at Castle Lombard caused their host much merriment.

None. Some earlier loot (such as the magic shortbow) was awarded as prized in the archery competition.

It is not know exactly when Florian was knighted.