Right after Honeypot left to help the others in the large cavern outside I rose from the body of Aldern and started to follow her, but while leaving I noted that my shadow cast from the light of Honeypots scarf moved in ways I didn't. It wasn't even on the right wall. I was drawn towards it and really wanted to embrace it, but I got hold of myself realizing that it was dark mold and moss on the wall strangely resembling a humanoid shape. Nathaniel came back in and told me Velicia and Dorothea had had a hard fight against the other goblin ghouls and all the ghouls we had killed before that had been raised by Aldern earlier, but they had been victorious.

I went back to my dead brother I never knew. I looked at his hideous appearance. Good thing I saw him before he became a ghoul so I have a better image in my mind of my brother. His clothes had been very beautiful but was now covered in old blood stains and even had little pieces of rotten flesh sticking to them. I noted that he had a cameo hanging from his neck. I opened it and saw it had a picture of Honeypot in it. It wasn't that good a match, but it was her, probably painted from a description. He had an awful mask made from flimsy strips of skin stained by blood. In his pockets I found three keys. One was an iron key with an opal. The next one was long and made of brass. It had a very complex tooth and a lion motif in the bow. The last one looked like the one I already had to this house. He had dropped a strange oversized razor he had been fighting with next to where he fell.

Looking around in the room there was a letter on a table next to some beautiful crystal glasses and silver plates. Sadly enough those were covered in old blood and rotten, maggot infested flesh from animals and humans. I felt sick and bringing the letter left for the bigger cavern. After a few deep breaths I returned, but stayed near the tunnel avoiding to look at the tables. I have to buy perfume for these kinds of situations. Standing there I read the letter out loud.

You have served us quite well. The delivery you harvested from the caverns far exceeds what I had hoped for. You may consider your debt to the Brothers paid in full. Yet I still have need of you, and when you awaken from your death, you should find your mind clear and able to understand this task more than in the state you lie in as I write this.

You shall remember the workings of the Sihedron ritual, I trust. You seemed quite lucid at the time, but if you find after your rebirth that you have forgotten, return to your townhouse in Magnimar. My agents shall contact you there soon—no need for you to bother the Brothers further. I will provide the list of proper victims for the Sihedron ritual in two days’ time. Commit that list to memory and then destroy it before you begin your work. The ones I have selected must be marked before they die, otherwise they do my master no good and the greed in their souls will go to waste.

If others get in your way, though, you may do with them as you please. Eat them, savage them, or turn them into pawns—it matters not to me. 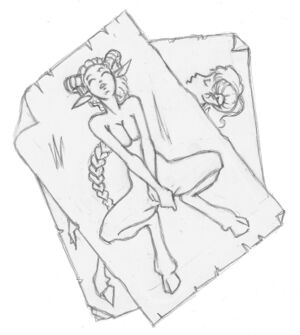 There were some thoughts about what could have been harvested from the caverns and what brothers he had been in debt to. Apparently by marking the victims with the star their souls benefited some evil power. They also seem to target greedy people. The main lead was the townhouse in Magnimar so we decided to go there after we finished searching the manor.

Velicia found lots of pornographic drawings of Honeypot. They were not too badly done. She said "At least these aren't drawn from model... Oh, but this one is..." her face turning slightly red. Dorothea had been looking around too and found a magical skeleton key.