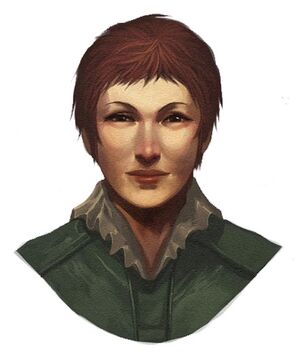 The next day a meeting was called in town hall where we were supposed to attend. Me, Velicia, Nathaniel and strangely enough Dorothea but not Honeypot did. There were several others; Niska Mvashti, a very old rhenne, Mayor Kendra Deverin, the Priest Abstalar Zantus, Ameiko, the smith Das Korvut, as acting sheriff and Brodert Quink. We all sat down and it got started by the mayor. Then we told our story of what happened. Korvut complained that we had gone down into the tunnels without approval by the town. We told him that the mayor had agreed to it. He still complained and Velicia started to argue with him until he tried to hit her. She easily avoided his obvious swing, but after that they all settled down. They thought we should study the diary we found carefully for clues. They also said we shouldn't leave town until Sheriff Hemlock got back as they needed our protection. I argued that if we were guards we should get paid and they agreed. Nathaniel convinced them that the best way to make sure that the evil temple below would be destroyed would be to get Zantus down there, but he wasn't thrilled by that idea. After we had assured him that not only had we killed all monsters, but could also escort him down there he reluctantly agreed.

We returned down to the old rooms below the glassworks escorting Zantus and while he did his thing I examined the walls and looked for any valuables we might have missed or anything hidden. There was nothing.

Velicia helped Ameiko by using her magical rituals to mend the broken glass in the glassworks.

Nathaniel renewed his contact with Shayliss. Even though he tried to keep it hidden, it's still a small town and soon her father had found out. Nathaniel wasn't welcome in the general store anymore and Ven Vinder even stares angrily at me and the others of our group. As if I had anything to do with Shayliss affairs. As long as I still can buy the homemade pies made by Ven's wife Solsta I can live with it, but sooner or later Nathaniel has to confront her father.

After being gone for five days Sheriff Belor Hemlock finally returned late in the afternoon. He brought with him ten men, which was an obvious disappointment for him. He had been wanting five times that many to be able to protect the town from the thought goblin attack. When they were a couple of miles out from Sandpoint along the road from Magnimar, he and the men had come upon a horse trader and his son that were being attacked by goblins. They scared off the goblins but not before the goblins had managed to grab the horse traders valuable warhorse they had brought with them. They sang the praise to Shadowmist as it was called. I'm sure it can't be cuter than my own horse. The one I got from Foxglove. He's adorable. Creampuff that is, not Aldern. The horse traders begged us to see if we could make sure that we bring it back. After some hinting they offered a handsome reward.

I convinced the others that we had to save this poor horse from the awful fate of being tortured and eaten by goblins. Nathaniel wanted to leave immediately, but I convinced him of the wisdom of waiting until tomorrow. I can hardly believe that he wanted to sleep out in the woods with all the insects and bugs. Thankfully I can go to sleep in my comfortable bed tonight.