Smugglers in the Swamp

In which the knights find unlikely allies on their quest to slay a fearsome hydra in the Vast Swamp.

Sir Nero Valair and his wife Lydia came to Sir Jorstag for advice. As brother-in-law, brother, and one of the heroes of the realm, Sir Jorstag was asked if he believed that Sir Dorian's ideas about Felsenmark had any merits. Sir Jorstag gave the matter some thought, and replied that Felsenmark needed proper knights. Time will tell if King Balnock gains more vassals from Cormyr.

After the tournament, [1] the knights turned their thoughts to the defense of the border. If Sembia was indeed provoked by the show of force, hostile troops might soon be seen on near border. Sir Dorian knew of an old fort nearby which might serve as a strong point for the army of Cormyr. This was Battlegate Keep, rumored to be home to brigands or monsters. 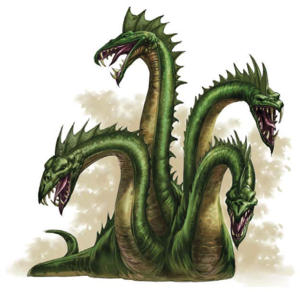 The keep was situated on a hill on the edge of the swamp. When the kights approached it, they saw tattered drow banners and decapitated heads impaled on spears. Upon inspection, the gruesome trophies appeared to be made of skillfully carved and painted wood. The drow banners, on the other hand, appeared to be from Menzoberranzan. Intrigued, the knights entered the dilapidated structure. No one greeted them or answered their challenge, so they sent their men-at-arms to secure the keep. After a scuffle, they appeared with a group of outlaws[2] which had been forced to yield to the trained soldiers.

The band smuggled goods between Zhenthil keep and Sembia. To their credit, they did not want to make a profit on their Cormyrean countrymen. The knights found no real fault with this, since the outlaws readily agreed to keep an eye on the border and this earn a tidy sum. Of course, they would have to vacate the premises once Cormyrean troops arrived to repair the keep. The keep had recently been occupied by drow, who had apparently been fighting among themselves.

The smugglers had devised a cunning plan to eliminate the competition[3] They lured a hydra by leaving a trail of meat for it to follow to the keep. The carnage when it attacked and killed the drow was a source of much merriment.

The knights decided to rid the swamp of the hydra, and set off into the swamp guided by one of the smugglers. The guide knew that it had made its lair in a cabin once used by trappers. The journey through the swamp would probably take several days, so Iordan preferred to occupy himself with matters of state at the tournament, though he kept in touch by means of sending spells. This allowed him to appear when danger inevitably reared it's ugly head in the swamp. Sir Jorstag had good use of his horseshoes of a zephyr which allowed his trusty mount to tread the air a few inches above the ground. The other knights were not so lucky, and had to rely on their outlaw guide.

As they approached the cabin, ripples appeared in the murky water of the swamp. A huge hydra appeared, and its many heads attacked Sir Jorstag. The other charged the beast, and it was soon slain. Three scrags were attracted by the noise from battle with the hydra. While the swamp trolls were easily slain, they were nevertheless a cause of some concern. Their faces were adorned with warpaint, and probably part of an larger, organized threat.

Sir Klaus claimed two hydra eggs which were found in the nest. Perhaps his keep will one day be guarded by a fierce hydra... The man who had carved the wooden dummies at the keep was a smuggler by the name of Grundolf. His skill caught the eye of Sir Jorstag who made arrangements to hire the talented woodcarver to decorate his keep. Sir Dorian determined that the keep was defensible and could easily be repaired. While Sir Dorian could easily muster several companies of trained troops (note paid for by the great ransom of count Harmel). This is more of a political than a military matter, and will have to be approved by the council of regents at a later date.