Rex Reason has the callsign "King".

Not much is known about his family, but he is a true working class hero, born and raised in New Jersey. 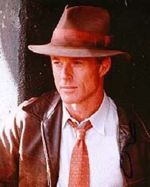 A militia pilot for the Jersey Jacks of the Empire State, a New Jersey based outfit that envies the high-flying lifestyle of the Broadway Bombers, Rex is one of the reasons the "Jacks" are now accorded some respect when they fly the skies of Manhattan.

Rex is a man that wouldn't quit the militia for nothing; free chew, some money and unlimited flying time, that's the life! His accomplishments in the air has led to minor celebrity status, and he now has access to the Manhattan "high life", which quickly ruined his economy, but led to encounters with such mysterious beauties as Diana Dale and Rebel. Now, he is looking for some well-paid, high-flying jobs on the side, to keep up this new lifestyle.

For a long time he flew an Avenger, but his inventive nature demanded that he developed his own design. The hardest part was to figure out how to improve on the Avenger. It's got looks. It flies okay and it packs a great arsenal. The answer was the Hellbat.