Diana Dale has the callsign "Double Down".

Born and raised in Southern California, miss Dale was the daughter of Mr. and Mrs. James Dale. Mr. James Dale was a very rich and ruthless tycoon. In 1923 he had gained a lot of enemies and saw it fit to leave the country. He then decided to nourish his interest in archeology. After a few years he had spent all his money and became ill. Within a year he died of fever and left a bankrupt wife and daughter in the jungle in the midst of South America. 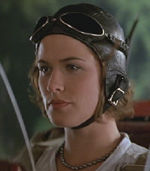 There's a story about Diana's adventures in South America called "The Mauser".

The time in the jungle was not easy. She had to take care of herself and her mother as a teenager. She learned how to find her way in the jungle and made some money as a guide on hunting tours. With the crash of 29 the flow of rich tourists ended. Ms Dale had to find new ways of earning her money. She learned how to shoot started to hunt for rare animals to sell to collectors. After four years she had earned enough to pay for the trip home. 1934 she finally reached California, but it was no longer the same.

Miss Dale met one of the hunters from South America who introduced her to Mr. Howard Hughes. He fell for this charismatic beauty. He gave her jewelery, a lot of beautiful clothes and took her flying. This changed her life. All she wanted was to fly and Mr. Hughes gave her an aircraft of her own. Their affair was short but passionate. After a scene at a restaurant they broke up. She got to keep the aircraft.

It wasn't just any aircraft Mr. Hughes gave her but a bloodhawk. It had no guns, but is a small, fast and beautiful bird, just as her owner is. Mr. Howard Hughes had it painted after Ms Dale's instructions but added nose art of her sitting in a very small dress on his own initiative. There are rumors that it was painted from photos that Mr. Hughes had taken of her wearing even less...

After leaving Mr. Hughes she had the aircraft fitted with two .50 caliber guns instead of the standard .40 and .30 caliber guns. She kept the nose art as a way of honoring Mr. Hughes. Although she would never admit it she still loves him.

She named the plane Silverhawk, but affectionately calls it just Silver.