In which no less than three important weddings take place.

This epispde covered the second half of the Year of the Bent Blade (1376 DR). Most of the important events are described in order below.

After the victory celebration in Suzail, it was decided that the trial of Count Harmel and Baron Delnir should be postponed until the royal marriage in winter. The trial will thus take place after the Winter Court and the Parlialment of Peers.

Florian and Iordan decided that it was time to fulfill their promise to King Balnock, and serve him for a time. The paladin and the war wizard rode north, and visited young Countess Juno at Castle Lombard[1]. They learned that half a dozen or so barbarians had settled in each village, and provided some measure of security. Theodoric of the Eagle Clan still lived in a barbarian longhouse, but was now a vassal of Countess Lombard. The visitors were pleasantly surprised that he had learned to read. There were some grumblings from the merchants when the barbarians collected taxes, since the traders believed they were taxed arbitrarily. The barbarians, on the other hand, thought that it was fair do demand more taxes from those who could afford it. Despite these minor problems, the young Countess seems to be able to rule her realm well enough. 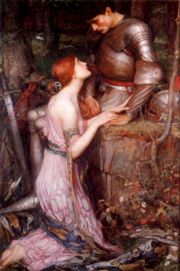 Sir Dorian and Mabel during their courtship.

King Balnock had established a proper court, albeit wihout the fops and hangers-on found in Suzail. Iordan busied himself with assisting the nascent bureaucracy, while Florian met with Father Keitel. The missionary was pleased with his progress, and he was hopeful that the Church of Siamorphe would eventually bring civilization to the Stonelands. As for education, Iordan found that learning and literacy was more suited to the women than the menfolk.

The visitors met with the old skald, and learned much about Mordian the Witch King and his general, Aran. Mordian was a king in the west before the rise of the of the other kingdoms. No-one knows where he is buried. The hidden Crypt of the Black Skull in the Storm Horns is the resting place of the Black Skull, Aran's champion.

Sir Jortstag asked his father's permission to marry Miranda Beauregard. His father expressed some concerns about about Caldera's offer of vasallage to baron Delnir, but this is a matter for the Caldera and Carmog families for now. After some arguments, Jorstag's younger sister agreed to be betrothed to Sir Nero Valair, Sir Jortag's former squire. At the royal marriage, King Balnock presented many chests of gold as a gift to his brude. This provided a much needed boost to Cormyr's failing economy, and allowed the regent to refuse an offer of financial assistance from Thay.

After the royal marriage, Sir Dorian was married to Mabel Ironcrow. The wedding gifts included a fortified manor and a pack of six fine wolfhounds. Later, Sir Jorstag and Miranda Beauregard were wed by the archbishop of Cormyr. Among other things, they received a falcon, and a masterwork lute from Sir Dorian.