In which the victory is celebrated in Suzail.

The Loylist army accepted the surrender of the Exile forces. The mercenary companies were given honours of war, and were allowed to return to Sembia with arms and colors. After some initial reluctance, Dorian managed to convince Othos to follow the knights to Suzail so that their courage would be honored in the capital. This required imbibing copious amounts of ale by Sir Dorian, Sir Jorstag and Othos. Sir Jostag learned that throwing up was more or less expected.[1]

The victors returned to Suzail where they were greeted by the royal heralds who instructed them to set up camp outside the city and prepare for a victory parade. 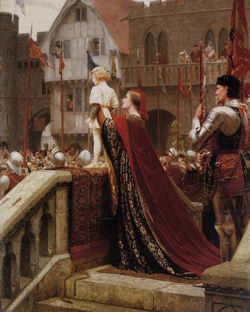 A little prince likely in time to bless a royal throne .

The next day, the heroes received an invitation to the royal palace. Sir Dorian arrived with his fiancée, Mabel Ironcrow and Sir Jorstag with Miranda Beauregard. Much to the surprise of those present, Iordan arrived in a black coach with Mariza Delhumi, the magistrate of Arabel.

They guests were received by the crown prince and the regent, and given several honors. Each hero received an enchanted signet ring. These are normally awarded only to the royal family and their trusted retainers.[2][3] They were also granted permissions to use a laurel on their coats of arms.

Words were exchanged between Sir Dorian and Sir Jorstag about their ladies' beauty . This prompted the crown prince to suggest that they settle the matter on the field of honor the next day.

During the evening, Florian spoke with Othos and learned that he and Balnock had once visited Aran Cabal in their youth. They had learned of the place from an old skald, and new it was a bad place where Aran the Dreadful was buried in a vast city with his warriors. He was a great general who once served a long forgotten king. 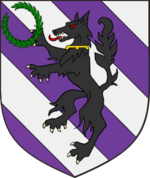 The arms of Sir Dorian with the laurel award.

Sir Jorstag and Sir Jorstag met with the crown prince and his retinue next day. Prince Azoun proclaimed that the should fight in full armor on foot, until honor was satisfied but not unto death. While Sir Dorian managed to wound his opponent, bold Sir Jorstag was the superior combatant, and was declared the victor by the prince. Sir Dorian apologized without reservation, thus satisfying both his and his opponents honor.

After the duel, Sir Dorian played a game of castles[4] against the prince. Like his late father, the young prince proved to have a natural talent for the game[5], and managed to score a draw against Sir Dorian. The prince was disappointed and exclaimed that there must be a winner. Sir Dorian gently explained that castles was excellent training for war, and that sometimes there were no winners on the board or on the field of battle. The prince seemed somewhat mollified by this, and invited the knights to his rooms to show off his impressive collection of tin knights, warriors and monster.

A week or two after the celebration, Iordan traveled to castle Valdiir to follow up on some of the clues to Aran Cabal he had found on his last visit. He spoke with old Sir Edmund Valdiir at the family castle. He is great uncle of the Count Valdiir's grandfather. As a young errant knight, his brother Hermann had fought many duels and lost, and quested to prove his courage and regain his honor. He had fought against witches in service to the wolf queen, and found a map with the location of a great necropolis, a city of the dead laid out like a spoked wheel. Sir Edmund's brother left on a quest for Aran Cabal but never returned.