The Man Who Would Be King

In which the peasant uprising is dealt with.

The heroes left the royal court and traveled to the north-east. In the barony of Tyrluk, they found a keep that had been brunt to the ground while the lord was at parliament. Some of the garrison had survived, and told the knights that they had been attacked by a peasant army. 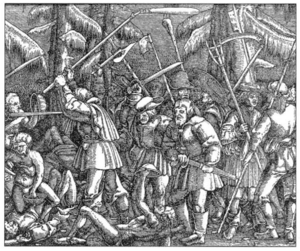 The knights gathered the remaining soldiers and marched in pursuit of the peasant army. It had left a clear trail, marked by the occasional burned official building. Soon, the knights arrived at the peasant camp. While it was not a professional army, it was far from the ragged band the knights had expected. Many had looted arms and armor, and it was clear that some of the army had militia training.

The leader of the army presented himself as King Krostard, the lawful king of Cormyr. A wise old man had given him a document that proclaimed him to be one of the late king's bastards, as well as a crown and royal ring. While the document seemed authentic, Iordan determined that the ring and crown had influenced Krostard's mind. Sir Dorian's oratory managed to sway some of the rebellious peasants, but those near the so-called king were held in sway by the crown's magic and the force of his personality. A suspicious crone in the crowd was actually a succubus in disguise, but she vanished when she was confronted by Sir Jorstag. Iordan negated the cursed items by means of an anti-magic spell, and the would be king came to his senses.

Krostard knew nothing of what had happened, and the heroes quickly decided that he was free of guilt. Krostard was a charismatic leader of men, commander of the border troops and generally well liked. This was probably the reason why he had been chosen as puppet king. Lesser peasant rebellions were dealt with by groups of heroes. Some were resolved by force, and there was a regrettable but probably inevitable loss of life. This was the end of the demonic conspiracy, but the peasants would pay dearly for their part in the uprising. The Barons of Tyrluk and Espar had lost had lost both buildings, troops, food and cattle to fire and looting. The lords demanded reparations, and the peasants would have to pay taxes and rebuild the burned structures. IOrdan offered to arrange for the crown to pay for their losses. The lords refured, as was their right.

After the situation with the revolting peasants had been resolved, the heroes considered the Sembian issue. It was decided to withdraw some of Cormyr's border guards; this would allow smugglers to operate freely, and ensure that some goods would still be available in Cormyr, albeit at a higher cost. Those who would not trade with Cormyr would of course lose money to their smuggling competitors. It was agreed that clandestine operations to damage Sembian trade and shipping had some merit. These were not realized due to the risk of collateral damage. Sir Dorian conceived a scheme to derive some military benefit from the smugglers and open borders. He decided to send his manservant Carl across the border in order to learn what he could of the smuggler routes. While the servants would undoubtedly squander much of his expense money, he would hopefully learn some routes that could be used to infiltrate small units into Sembia.

A more blatant show of force Decided to show Sembia that Cormyr was alway ready for war. Come spring, a grand tournament will be held in Wheelon, but the location will be changed to Battlerise a few days before the tournament. Hundreds of knights will ride to the Sembian border and display their martial skills. Sembia will hopefully percieve this as a threat and feel the need to raise troops, hopefully at great expense.