In which the heroes brave the mists of the ruined town.

Iordan contacted the heroes by means of a sending spell, and teleported to their location. When the mage learned of their adventure in Farer's Crest, he identified the unknown symbol as that of Orcus, the Demon Prince of the Undead. The heroes made camp outside of Tilverton so that they could enter the ruined town at first light. During his watch, Florian heard something flying through the night sky. Whatever it was, it was no dragon, but it sounded larger than any bird.

The heroes rode into the mists. The knights could barely see past the points of their lances, and the poor paladin felt the thick, clammy mist as a very palpable evil.

Danger lurked in the mists of Tilverton.

Near the town walls, the came upon a score of slain demons. They had been impaled on spears and lances, or nailed to wheels and posts. The knights realized that this was the handiwork of the evil angel the peasants had seen. Iordan hypothesized that the dread magics unleashed in Tilverton had weakened the veil between the the world and the abyss. Tilverton was now an unhallowed playground for demons and undead.[1]

One of the lances appeared to have burned the impaled demonspawn. On closer inspection, it turned out to be a mighty magic lance with the insignia of the Purple Dragon Knight. As the ranking Dragon Knight, Sir Dorian decided that is should be most useful in the hands of Sir Klaus. Much to his credit, the knight declined, saying that he was not a member of the order. Sir Dorian did not think this much of a problem; Sir Klaus had proven his bravery and honor against the fell troll, and was welcome to join the order or give up the lance when they left Tilverton.

Soon, the came upon a horde of horde of lesser demons and undead who marshaled on a square. They were easily dispatched along with their rutterkin minions, and fell to steel and sorcery. Among the remains were found some magic arms and armor. It appeared that the foul creatures had looted the fallen defenders of the city. Of particular note was a longsword which had been carried by Sir Reginald, one of late King Azoun's companions. 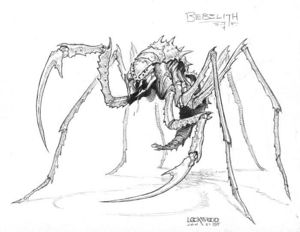 The heroes left the square, and soon noticed that a huge spider demon was stalking them. It had no doubt been attracted by the sounds of the recent battle. When the heroes engaged it, they were ambushed by three more bebelith spider demons. These were dispatched by spell and steel without much trouble.

From the stories of survivors of the Battle of Tilverton, Sir Dorian was able to guide his friends to the house where his father and other brave knights had made their final stand. The guard house had been reduced to rubble, almost as if someone wanted to bury the remains of the defenders. Since both Dorian's and Iordan's fathers were among the fallen defenders, they had every reason to excavate the ruin.

This took several hours of grueling work. Buried under the rubble were the remains of a dozen heroes, including Nathaniel Wolfe and Cladivus Chaff. Sir Dorian knelt beside his fathers body and gave thanks to Siamorphe. His father could finally be laid to rest in the family crypt. Sadly, the reality of the situation only allowed the heroes a modicum of decorum, for Iordan reported that dark forces lurked outside the ruined building. As they readied the bodies for transport, they heard a female infernal voice speak: "He whom you seek can be found at Brazier's Square."[2]This was the fallen angel who had slain the demons. When asked, she told them that she was "a soldier in the Blood War". After sharing this morsel of information with the enemies of her enemies, the erinyes flew away on black feathered wings. 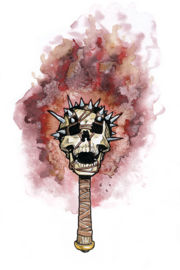 The symbol of Orcus.

The square where the workers of brass had formerly plied their trade had been cleared, and a large stone altar with the symbol of Orcus had been erected there. Dark stains was testament to much innocent blood that had been spilled there in honor of the Demon Prince of Undeath. An arcane investigation revealed that some sort of ritual had been performed there, perhaps

Neither vampire nor crypt was in evidence. Sir Dorian called out a bold challenge to the undead knight. In after a brief wait, the knight appeared. Sir Dorian and Sir Verenar introduced themselves and settled the particulars of the duel. Sir Jorstag offered his friend the use of Sir Reginald's mighty blade. With it hand, Sir Dorian and defeated the vampire knight.

As before, his corpse turned to mist. This time, however, the heroes were able to track it to the Truesilver crypt on the noble's graveyard. It stood at the very edge of the crater and was in danger of falling into the it. A fly spell allowed the companions safe entry, and they easily located the vampire's coffin. After impaling the undead knight and decapitating him, they put the remains in two sacks and prepared to leave the crypt. With lurch, the crypt was suddenly flung upwards! The heroes were flung about in it like so many dice in cup, but were able to escape the crypt before it fell to the ground.

As they descended to their mounts, they spied a vrock and a host of lesser demons. It was clear that the avian demons was prepared for combat, for it summoned mirror images of itself. When the heroes made no move to attack, the demon faded from view. The heroes had accomplished their mission and thought it prudent to leave Tilverton before the fall of knight.

Iordan received word from Prefect Marisa Delhumi that their agent on the field.[3] The Cult will unleash the dreaded turtle dracolich on Marsember in two weeks time. Next time, the heroes will be prepared for it.