Not much is known about Caldera or his family. 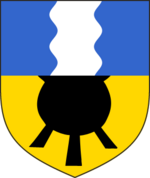 The arms of Caldera?

The coat of arms is a suggestion, but can be used as a placeholder until Segmarian approves the design or comes up with one of his own. The current boiling cauldron is probably better than the earlier version (available on the image page).

Possible orgins of the family name and coat of arms:

Perhaps a heroic ancestor defeated a coven of evil witches. This might be represented b a cauldron (it certainly looks better than other witchcraft paraphenalia). --Urban

"The lower left quadrant features a cauldron, the Spanish olla, an earthenware pot, which was widely used in Spanish heraldry to symbolize serving and feeding the hungry. In iconography, it is the usual symbol of San Diego."