In which Cormys displays its martial might on the Sembian border.

The old year came to an end. It was now 1378, and as spring came to the land, the was much talk of the coming grand tournament. It was sure to be the largest in living memory, and many knights traveled to Battlerise. Karl and Frank appeared at the camp of the heroes. They had recently returned from their foray into Sembia, very smug and well dressed. They assured the knights that a route could surely be found if the need arose.

Many young knights appeared on the field and sought to prove their valor and skill at arms. Among them were Sir Nero, Sir Armand and Sir Cornelius. While they had valiantly defended the Dalelands from the predations of Zenthil Keep, more glory could be won in Cormyr. Some nobles (few would call them knights) from Felsenmark took part in the melee on foot. Heralds were sent over the border into Sembia, and it was not long before Sembina knights appeared, albeit in the guise of white knights.[1] One knight hailed from distant Karameikos, now a part of the kingdom of Traldara.

Sir Klaus and Sir Marquardt fought each other to a draw on horseback. The battle continued on foot until Markquardt collapsed from exhaustion. Sir Dorian fought half a dozen challengers who were no doubt less than pleased with his role in recent political developments. He was the only Cormyrean knight to face a challenger from Sembia. An impromptu masquerade ball was held in order to allow all knights to meet as friends. 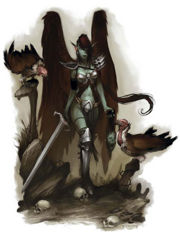 A succubus, perhaps the same who tried to stir up rebellion recently, had infiltrated the spectators. She was discretely slain by the eriniyes the heroes had seen in Tilverton. Later, a commoner sought an audience with the knights. He presented a coin minted in Tilverton and a letter.[2]

"We have a common enemy. I can offer my assistance, but at a price. If you would meed with me, nail this letter to the gate of the ruins of Battlegate Keep."

It was clear that this letter must be from the erinyes they had seen in Tilverton. After some discussion, the heroes agreed to hear her suggestion. Iordan knew himself to be easily tempted, and wisely chose to stay behind.

They met with the infernal erinyes at dusk, near a dead tree under a blood-red sky. She introduced herself as "a soldier in the eternal war between law and chaos". When asked, she replied that they could refer to her as Captain Charybdis.

She offered to aid the heroes in Tilverton if they agreed to slay King Balnock. Balnock had slain her master,[3] and she was bound to avenge this. This offer was rejected out of hand, even though the knights agreed to a truce should they meet she-devil in Tilverton.