In which the knights scout the swamp and locate the drow hideout.

The knights instructed the outlaws to scout the swamp and gather intelligence on the enemy, while they returned to Suzail. Iordan raised the issue of Sembia and suggested that Cormyr should send an ambassador. No one has a suitable candidate in mind, so the matter was left to the Council at their next meeting.

At the Council of Regents, Blayne Saran argued eloquently that such an embassy would benefit many people, for the poor trade with Sembia had led to ruin for some families. de Mornay thought it served people right for meddling with trade. Iordan thought the post ss ambassador could serve as a reward. Velodar understands the trade issues but was intimidated by the warrior nobles. Florian suggested that whoever is sent should be an individual from one of the country's finest families, a skilled diplomat and able to survive any acts of violence directed at him. It was agreed that this must be a member of the Silver families. Ayesunder Truesilver was agreed upon unanimously, and a messenger was sent to the Duke. He declared himself willing to serve the kingdom. 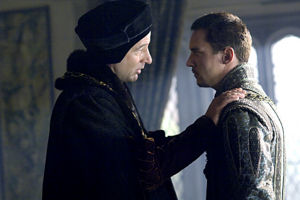 Ayesunder Truesilver was asked to serve as ambassador.

Sir Jorstag received word that a score of barbarian lads from Felsenmark was sent to the estates of Carmig and Valair as thanks for the pledged loyalty of Sir Nero Valair. Sir Martin Sabledeer asks to serve as Sir Jordtag's squire. He was not be the sharpest tool in the shed, but brave, strong, and loyal. He had snuck away to join the volunteers in the War of the Exiles. Needless to say, he and Sir Jorstag got along famously.

The knights traveled with the Truesilvers house troops, the ambassador and a small staff to the Sembian border. In addition, about a hundred men at arms[1] marched towasrds the border, commanded by Sir Cornelius and Sir Armand. The embassy crossed into Sembia and was welcomed by the the authorities. The knights stay at Battlerise. The detour to Suzail had taken about two weeks, and the knights would soon be to enter the swamp and continue their quest to slay the drow who had defiled Cormyr's sacred soil by their very presence.

The knights and their men-at-arm made camp a short distant from Battlerise. During his watch, Florian was woken by a messenger from the town. One of the smugglers in the swamp had arrived at the town, severely wounded. The smugglers at Battlegate Keep had been attacked by trolls and dark elves!

When the knights arrived at the keep, they found it in flames and Tied on the flames are a few bandits, some are still living. The knight fly into the keep to rescue those who are still alive. Scorched by the fire. Two live though tortured, one died in the flames. The men are grateful, and give the knights what intelligence they can. The leader of the smuggler had been impaled on a pike. Some bodies at the keep had been eaten buy many were missing. It seemed likely that some of them had been taken prisoner by the drow, and might still be alive. Several of the survivors hade been tortured by the dark elves who had asked who had killed the hydra and the three trolls.

Iordan managed to track the drow some distance into the swamp and found a place where they had landed their canoes. The survivor knew that some of the bandits had discovered drow in the swamp near the old trapper hideout. They thought they had not been seen but the drow attack a week later proved them wrong. Sir Dorian considered the situation and surmised that the delay may have been caused by drow infighting, for the dark elves traveled swiftly. They likely came from the ruined Ovarskyte Keep in the middle of the Vasst Swamp.

The nearest noble was Count Valdiir, so a detour was made outside the swamp. The troops were ordered to make camp at Battlegate and then assess the damage to to the keep. The count was not happy to hear that the swamp trolls were organized by the drow.

The count have some old plans of the keep from the days when it was still isuse. Unlike many keeps it had no sublevel, for it was built on soft, wet ground. Drow had sometimes been seen in the swamp but never in large numbers. The huntmaster drew a map of the old road. It which would allow the knight to travel to the keep, for the road was still mostly intact. By entering the swamp from the west where it is narrow, the knight would not have to travel far into the swamp.

The heroes made their way towards the Vast Swamp, and rested at a local farm. The stout farmer have seen many trolls with warpaint, and his old father told the knights that the trolls were not as garrulous as they should be. They were clearly kept on a short leash by the drow.

The knight entered the swamp in the guide of animals, while Florian was sent to scout ahead. The wolves on the road seemed like a tasty snack to a lurking scrag, who was easily dispatched and burned with Sir Klauys' flaming morningstar. The knights continued, and by mid-day the wear the ruins of Ovarskyte Keep. They keep was largely overgrown with vines, and guards were conspicuously absent. The west wall of the keep was ruined, and while the breach could serve as a way into the keep, the drow could also use it as a means of escape. The heroes pondered various stratagems. In the end, Sir Dorian and Iordan agreed that a well-placed wall of thorns could probably seal of the main keep and trap most, if not all drow.

The cowardly drow were no doubt lying in ambush inside they keep. Nevertheless, the knights resolved to enter it and put and end to the dark elf incursion.