In which the siege of castle Valdiir is lifted.

Soon after the call to arms, Sir Jorstag arrived at the army camp with some 30 mounted knights and warriors. These were the sons and daughters of Princess Alusairs former adventuring companions. He reported to the General and was instructed to place his troops under the command of Sir Dorian.

Dorian Wolfe called a council with his officers. Sending to Count Sebastian Valdiir courtesy of Iordan. The Count informed the relief force that the besieging force consists of three companies of heavy infantry, but no cavalry.

The troop mustered at dawn, and Sir Dorian delivered a speech in which he reminded the warriors of the proud heritage of Cormyr, who must once again go to war to defend their country against the enemy. Without further ado, the troop [1] rode off to war.

The knights ride to glory.

When dusk approached, the troop was still a few hours ride from castle Valdiir. The scouting party reported that peasants had been seen in the woods. Florian spoke with one of them, a blacksmith by the name of Rolfe. He was a man great strength and loyalty, and told the knights that the people were ready to fight for their liege and their land. Young lord Willhelm Valdiir [2] was gathering the commoners, and preparing to assault the besieging force.

The squires volunteered to remove some of the obstacles and a safe scout a path for the cavalry. The stealthy operation continued through the night, but they were discovered just as the cavalry formed up at the edge of the forest. Bold Sir Jorstag encouraged Baroness Kendall [3] to attack with her unit in support of the brave squires.

Siege is lifted by a furious cavalry charge, supported by the war wizardry and the peasant militia. Once of the mercenary companies bore the brunt of the initial charge, and was all but destroyed when the besieged defenders sallied forth. Remarkably, the Loyalist attackers suffered no fatalities in either battle though several were injured. Some of the loyal peasants died at castle Valdiir, but the their sacrifice will not be forgotten by the Count. The mercenary commanders surrendered and were offered honors of war. They agreed to leave Cormyr and take no more part in the war.

After the battle, the Count informed the relief force that a necromancer in the Exile army had offered to betray his allies if the Count would tell him the location of Aran Cabal. The Count had no knowledge of what this was, much less where it could be found. He had little choice but to reject the offer and defend his castle against the encircling troops.

The defenders tended their wounds while Iordan contacted the main army by use of another sending scroll. General Delaney ordered the cavalry to make their way to the main battle site as soon as practically possible. Dorian decided to allow the troop a rest brief rest, and be ready to ride within the hour.

Sir Dorian was pleased to announce that the brave squires had acted above and beyond the call of dury, and thus deserved the honour of knigthood. Since they were knighted on the field of battle, there was no opportunity to present them with the traditional gifts. [4] Instead, each of the knighted squires was given a one of the enchanted longswords found in the lost village. Sir Cornelius was given a periapt of health by Sir Dorian, and Sir Nero was given an amulet of natural armor (?) by Sir Jorstag. Finally, the knights thought that the greataxe from castle Lomard could be put to good use by the strong Sir Armand. Sir Jorstag gained a new squire, one of Baron Valdiir's sons. [5]

Later in the day, the column was caught in well-planned by mercenary crossbowmen and infantry. The initial volley and cavalry charge did little harm, and once the first wave of attackers were defeated, the knights scattered the ambushers. Among the cowardly mercenaries was a necromancer and his newly animated undead warriors. He was soon felled by Florian's blessed arrows. Florian gathered his possessions and gave them to Iordan for future study.

When the force made camp, the war wizards studied the necromancer's notes. He gained some insight into the plans of the Cult of the Dragon. Apparently, the Nec-Tomen is an accursed blade of great necromantic power. When it is swung above a battlefield, the dead will rise and serve the wielder. Aran Cabal is likely the location of the blade.

The untested troops have fought in two skirmishes, but have yet to prove themselves in a real battle. The cavalry unit now consist of well over six score knights and mounted warriors. [6] Hopefully, they will help secure a victory for the Loyalist forces in the coming battle.

The Battle of Castle Valdiir 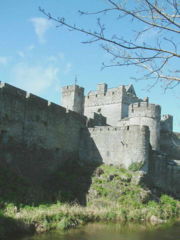 The Battle of Castle Valdiir was fought at castle Valdiir in the Western Marches of Cormyr in the Year of the Bent Blade (1376 DR). It was the first battles of the Noble's War.

Total of 300 heavy infantry (armed with melee weapons and crossbows).

Result: Decisive victory for the attackers.