This is a shopping guide for the Savage Future.

Modern weapons from the core rules can be used in the Savage Future. See below for generic weapons and armor.

Armor for civilians is mostly synthetic leather or light polymers. Life is cheap, and most people prefer to spend their money on drugs or scumstoppers rather than armor. That said, armor is available in a variety of styles and protection levels.

For the purpose of these rules, personal armor is classified as "light", "combat", or "battle" armor. It is made from Kevlar or similar polymers, and negates some of the AP rating of bullets.

Kevlar: Kevlar traps bullets and negates some of the armor piercing effect of bullets. Light armor has a thin lining of Kevlar, and only negates 2 points of AP. Heavier armor types negate 4 points of AP as normal. Heavy Weapons ignore the special rules for Kevlar.

Combat armor: This class of armor is bulkier and made for combat. It cannot be hidden (except perhaps under a trenchcoat) but does not hinder movement. This is the stuff police, military and security guards use.

Battle armor: Infantry battle suit consists of a hard shell of plastic, ceramic or metal between which is sandwiched a layer of ballistic polymer cloth. Suits come with a combat helmet, a full breastplate, and upper arm/lower arm and thigh/shin plates. The helmet has a 50% chance of protection against head shots. Most helmet have an armored visor which gives complete protection if it is closed. Optional extras include night vision gear, radio, and climate control.

Leather: Cheap (synthetic or vat grown) to very expensive (made from cloned or extinct animals).

Jumpsuit: This is a form-fitting armored one piece garment which can be concealed under a trenchcoat or bulky clothing. The heavy version incorporates rigid armor over vital areas and comes with knees and elbows pads. It is favored by corporate strike teams and some Sanctioned Ops.

Trenchcoat: The classic trenchcoat is popular with Ops who want to cultivate their image as hard boiled private investigators. It is also useful for concealing weapons! 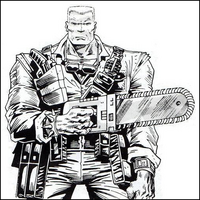 Axe: This is a light axe such as a tomahawk that can be thrown or used in melee.

Baseball Bat: A wooden bat breaks on a 1 on the Fighting die, regardless of Wild Die. An aluminum bat costs double the listed cost, but doesn’t suffer the chance of breaking.

Bullwhip: This heavy duty whip may be used to initiate a Grappling maneuver against a single opponent within range.

Combat chainsaw: The combat chainsaw is the weapon of choice for warehouse gladiators, gangcults and zombie survivors. It is a more compact version of the standard chainsaw, with improved balance and power. The battery pack allows for several hours of carnage per charge.

Katana: From Realms of Cthulhu.

Mini-screamer: This is a pistol-sized, short range version of the screamer.

Optic Burner: This is a short-range cybernetic energy weapon which replaces one of the user's eyes. It has a the same damage and range as a sawn-off shotgun, but counts as fire damage. This means that ballistic armor protects, but any bonus from Kevlar does not apply. The burner needs a round to charge between shots. The cell charges by leeching power from the users body at the rate of one shot per hour. The burner can not be used for vision, so you get the One Eye hindrance when you install it!

Screamer: A screamer is a compact shotgun-like weapon that fires a cone of sonic energy. This counts as non-lethal impact damage. Use the rules for shotguns (to-hit bonus and damage reduction over range).

Sword Cane: Ranging from simple to elegant, a sword cane conceals a slender, tempered blade within. When sheathed, people rarely otice it as a weapon (–2 Notice to be detected). Drawing this weapon quickly requires an Agility roll.

Armor Piercing: This type of ammo is designed to pierce armor and obstacles, but does less damage against unarmored soft targets as the bullets don’t deform as much and inflict less trauma. AP rounds gain +2 AP, but against targets without armor they subtract 2 from their damage. Cost: x2

Hollow Point: These rounds expand in soft tissue, tearing a bigger hole in the target. Hollow point rounds cause +2 damage to targets with no armor, but against armor they lose the bonus, any AP value listed for the gun, and add +2 to the target’s armor value. Cost: x2

Depleted Uranium: A weapon loaded with these heavy slugs counts as a Heavy Weapon. This is the same as MetaStoppers in SPC. Cost: x20

Thanks to decades of unrestricted research, medical technology in the Dark Future is much more advanced than in our world. Biosurgery is the popular name used to describe a number of medical procedure, drug treatments, and biotech or cybernetic enhancements available in the Dark Future. Much of the biotech produced by GenTech and other corporations is designed to improve quality of life rather than give superhuman abilities.

Brought to you by GenTech, the biodivision that really cares.

Biotech and cybertech use the rules for cyberware in the Science Fiction Companion.

Biosurgery can repair permanent damage, such as lost limbs and reduced ability scores. The exact nature of replacement the part is left to the game master. Possibilities include replacements cloned from the patient's DNA, generic vat-grown spares, cybernetic devices, or spare parts harvested from corpses!

Repairs use the cost for prosthetic in the Science Fiction Companion. Note that cheap repairs use cybernetic och recycled parts that cause Strain!

This category includes cosmetic surgery and quality of life stuff with little or no game effect. Cosmetic biotech has a monetary cost but does not cost Strain. As a rule of thumb, assume that cosmetic procedures cost 50% of prosthesis.

Many of the drugs mentioned here are illegal but readily available. Most MegaCorps deliberately leak their products to the black market!

Popular drugs include recreationals such as Jujubes, Candy Z, and GloJo, as well as hard drugs like Zonk, Method-1, Hero-9, and Smacksynth. Rules for hard drugs are left to the game master, but they are certainly good for a Major or Minor Habit![1]