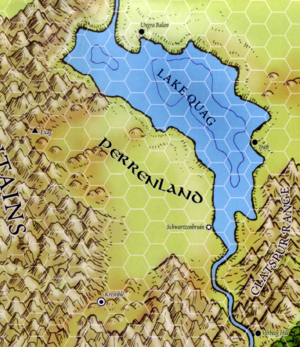 Perrenland is a small republic at a crossroads between three cultures; the Oerdians in Nyrond, the Baklunish to the north and west, and the nonhuman empire of Iuz to the east. With a history of fierce resistance to invaders, the Perrin first resisted Oerdian nobles, then the armies of Igliw the witch-queen. Independent since a long time now, the recent Greyhawk Wars saw Perrenland neutral, but sending mercenaries to the enemies of Iuz.

Sandpoint is farming and trading town on an outcropping nto lake Quag.

A cosmopolitan nation where nationalities and races mix freely, Perrenland is very much a part of the common trade culture centered in Greyhawk city. Trade flows three ways; down the river towards Nyr Dyv and Greyhawk, to the south east Baklunish, and to Wolf Nomad markets on the north shore of Lake Quag.

The common tongue is universally recognized as the language of diplomacy and commerce. Still, different groups speak different languages and have different cultures. The language and people can vary wildly from one valley to the next. Oerdians, Flan, Baklunish, and even Suel groups lead their separate lives in remote valleys, along with dwarves, gnomes, and halflings as well as small tribes of humanoids. Rhenne have started appearing outside Perren cities in the last century, and are made welcome because they are clearly not invaders. Overall, the Perenn are friendly towards outsiders as long as they come in small groups not bend on conquest.

Several dwarf-holds survive under the Yatil mountains, even if the surface is riddled with monsters. These are considered independent holding within Perrin borders. The dwarves rarely join Perrin mercenary contingents, but gladly deliver arms and armor.

On the east side of the Clatspurs and the east part of Vesve forestlies an Eladrin land with a significant population, including some elves and fey. This is not officially a part of Perrenland, but so closely allied that the difference is often moot. Perrin armies often have Elven and Eladrin contingents. With the recent opening of portals to the Feywild, the Eladrin have become more active as their cities there become more accessible.

A large gnome enclave exists in the Seipa Uplands, again as a semi-independent region geographically but not politically part of Perrenland.

Like most common culture countries, the churches of Perrenland have few mythological ties to each other, being rather a pragmatic collection of gods with useful domains. Animism is also widespread, and worship of spirits and fey is respected under the auspices of Beory, except perhaps by the most devout Cuthbertians.

Pelor: The sun is universally honored, and no less so in Perrenland. The church is cosmopolitan, which makes it suspect in the eyes of some Perrin, but the benefits it brings are hard to argue with.

St. Cuthbert: According to Perrin myth, the saint himself was here and preached; some say the majority of his exploits happened in Perrenland, while others point out that his values are so obviously Perrin that he would not have had to bash so many heads had he been from here. Either way, the church is fiercely independent from other churches of St. Cuthbert and stands as a beacon for Perrin independence, especially in remote mountain valleys.

Beory: The worship of the great mother is still widespread in the remote parts of the country, tough her claim to supremacy is not recognized. She is seen as the all-mother and the center of life, but is quite a distant goddess. In many cases, those claiming to worship her are actually spirit- or ancestor-worshipers.

Allitur: The Flan god of propriety and peaceful dealings, Allitur embodies the nation's need for cooperation, internal peace, and unity against outside enemies. He is the official protector of the cantonal council.

Berei: The first mortal queen among the Flan, Berei is known as the bride of the wilds, the mother of the Flan (and by extension all humans), and the bringer of riches from nature. Her cult embraces the worship of her husband, Obad-Hai as the first king and great hunter.

Ulaa: As the goddess of riches found in hills and mountains, Ulaa is popular with miners, prospectors, and dwarves, but also with the many mountain farmers and herdsmen. In Perrenland, she is often paired with St Cuthbert and they are popular in the same regions.

Zilchus: An invading Oerdian god, Zilchus is well-regarded because he brings wealth trough trade and crafts. Popular in the lowlands and cities.