The Lion and the Eagle

The Lion and the Eagle is a Savage Worlds adventure campaign about the Swedish phase of the Thirty Years' War. The lion in the title is king Gustavus Adolphus of Sweden, and the eagle is the Habsburg Empire. 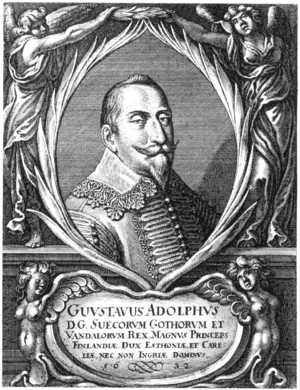 Gustavus Adolphus, the Lion of the North, King of Sweden.

The year is 1630, and Sweden goes to war to help the Protestant cause in Germany. This is a chance for brave Swedish lads to serve King and Country, win glory and riches, and give the Imperialists a good thrashing! Adventures will include small scale combat, espionage, diplomacy and romance set against the backdrop of the war. The characters may even find themselves part of large scale battles, either as troops or free agents with some objective to accomplish. The campaign will follow their adventures from their arrival in Germany to the battlefields of Breitenfeldt, Lützen, and beyond. 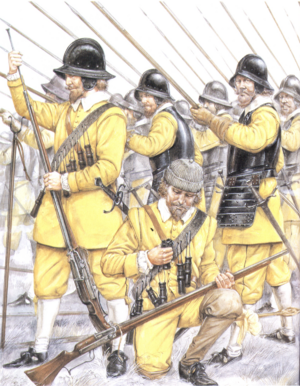 Soldiers of the Yellow Regiment.

Soldiers are required for the first phase of the campaign. Later, other concepts such as spies, priests, camp followers and diplomats are possible. The characters will spend much of their time away from the main force, so it may be useful to have one or more of characters be an officer or gentleman (with Command or Noble edge) to avoid being rounded up by the provosts as deserters. This may also make interaction with allied forces easier.

The campaign outline assumes that Swedes and their protestant allies are the protagonists. The forces of the Catholic League are the enemy.[1]

Characters start as Seasoned with 20 XP. This allows for more well rounded characters, such as veterans from the war in Poland.

As per the recommendation, starting cash is doubled for every rank. Thus, Seasoned characters start with $1000. Optionally, the characters start with default cash ($500) and military equipment as assigned by the Game Master. For a cavalryman, this will be a horse, saddle, broadsword and two wheellock pistols.

The works below are available locally for use by the War Master and players.