From Hastur
Jump to: navigation, search
Escape from Imboca is a Realms of Cthulhu campaign set in Catalonia during the Spanish Civil War. It is a prequel to the Secret War, and survivors of the campaign may go on to fight the Axis and their eldritch allies during the war. 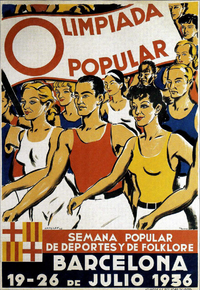 Poster for the People's Olympiad.

The player characters are soldiers and civilians on the side of the Republic during the Spanish Civil War. Aristocrats, clergy and capitalists are not recommended! The campaign begins in Barcelona in June 1936. The People's Olympiad is about to start in a few days, and this allows for a variety of foreign characters, such as tourists, athletes, journalists, and students.

Most characters are probably civilians who find themselves caught up in Spanish Civil War rather than soldiers or adventurers. That said, all characters should start with at least d4 in Guts as well as d4 in Fighting or Shooting as recommended in Realms of Cthulhu.

Characters start at Novice rank with 0 experience points and $150 (default for the 1920s). 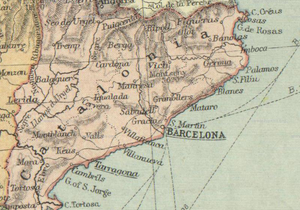 The first part of the campaign will give the characters a chance to risk their lives, if not their sanity, by fighting for the Second Republic against the Nationalists in Barcelona and on the Zaragoza front. The second part will take them to Imboca, an insular fishing village on the coast north of Barcelona.

This is a partial list of inspiration for the campaign. Further recommendations are gratefully received.

The main inspiration for this campaign is The Battle of Spain by Anthony Beevor, and of course the movie Dagon which re-imagined Innsmouth as the Spanish fishing town of Imboca. The Shadow Over Innsmouth by H.P. Lovecraft and the Dark Adventure Radio Theatre audio drama of the same name are highly recommended for players in the campaign.

A partial list of movies set in the Spanish Civil War include Land and Freedom, Libertarias, Here Be Dragons and For Whom The Bell Tolls. The Devil's Backbone by Guillermo del Toro is notable as an occult movie set during the war; his later work Pan's Labyrinth takes place in 1944 after the Nationalist victory.